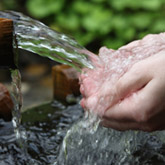 Maybe you haven't gotten what you've been pursuing, whether it's a relationship, an accomplishment, or a position. You feel you have an incurable restlessness. If you've gotten what you thought would fill the hole in your heart, and the hole is still there, your next stop is despair.

Meriwether Lewis may have been the greatest American hero of his time, but he knew about despair. When President Thomas Jefferson bought the massive Louisiana Purchase from Napoleon, the size of this young country was more than doubled overnight. Jefferson tapped his personal aide and a distinguished war veteran to lead the incredible adventure we know today as the Lewis and Clark Expedition. Lewis' longtime dream had been to find the source of the Missouri River and to drink from it. He got his dream, but if only it had satisfied his thirst.

In a letter to a friend after he reached his pinnacle, Meriwether Lewis wrote these words: "I feel all that restlessness, which I cannot help but thinking proceeds from that void in our hearts. Whence it comes I know not, but certain it is, that I have never felt less like a hero than at the present moment." Shortly thereafter, Meriwether Lewis died of what is believed to be his own suicide. He accomplished his greatest goals; he drank the sweet water of success and conquest and the admiration of thousands, but he still had not found what fills what he called "that void in our hearts." Maybe you know that feeling.

Ultimately, the void is in our hearts because God isn't. In the Bible's words, we were "created by Him and for Him" (Colossians 1:16), but we haven't lived for Him. Again, according to the Bible, 100 percent of us have basically done life our way, not God's way. We're missing Him. Meriwether Lewis didn't understand who he was restless for.

God wants to show you how the thirst in your soul can finally end by drinking from the Source and by experiencing for yourself a personal love relationship with the God who put you here. Isaiah 55:2 from the Word of God says, "Why spend money on what is not bread, and your labor on what does not satisfy? Listen, listen to Me, and eat what is good, and your soul will delight in the richest of fare."

Jesus, God's Son, who died to pay our penalty for hijacking our life from God, made this promise: "He who comes to Me will never go hungry, and he who believes in Me will never be thirsty" (John 6:35). The void will be filled and the restlessness will be satisfied. With the gap between you and God bridged by Jesus, you can finally drink from the Source. It starts the day you "come to" Jesus and "believe in" Him by placing your total trust in the One who loved you enough to die for you and then was powerful enough to rise from the dead.

There's no one else who can satisfy your thirsty soul. Beginning today, you can be, as so many of us restless seekers have discovered, thirsty no more.