There is often a shortage of blood available in blood banks due to severe winter weather, a holiday season, and a bad flu season. If you've had a bad car accident or a couple of gunshot wounds, you're in a world of trouble. There is no fact more basic to human life - without the blood you need, you die.

There are verdicts given in court rooms all over the country every day, but most of them don't affect you. One verdict that really does affect you is the one that determines where you'll spend eternity. 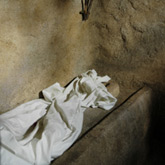 Every once in a while, comic strips have something really good to say. Have you ever seen "B. C."? He is this little scraggly-haired caveman that makes some fairly modern observations. The best one appeared one Easter and began with B. C. outside a tomb with a rock next to it. Then, in the next panel, he goes in the tomb and looks around. In the third panel, he finds the tomb empty. Finally, in the last panel, he comes out, stands outside the empty tomb, and shouts one word: "Yes!"