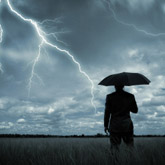 Years ago, a major art gallery sponsored a competition for painters and they were offering prizes for the best painting on the subject of "Peace." The painting that won was a real surprise. The scene was the ocean in a violent storm. The sky was ominous, the lightning was cutting across the sky, and the waves were crashing into the rock walls of the cliffs by the shore. Where was the peace? You had to look twice to understand what was going on. There, about halfway up the cliff, was a birds' nest tucked into a tiny hollow in the rock. A mother bird was sitting on that nest with her little babies tucked underneath her, sleeping soundly. That was peace!

Sometimes life seems to be about building sand castles, and we put a lot into things that ultimately don't last. Jobs can turn out to be like a sand castle.