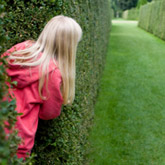 Only four people survived above the 78th floor on that awful September 11 when a hijacked jetliner struck the south tower of the World Trade Center. Two of those were in a group of six that were on the 84th floor, right in the middle of where the plane crashed into the building. The six men ran to the stairwell and started that long trip down. At the 81st floor, they met a woman who said, "You can't go down. The floors below are in flames. We have to get above the smoke and fire." The six coworkers debated whether to go up or down. Four decided to climb up, hoping for a helicopter to rescue them from the roof. They could not have known that the rooftop doors were locked, and the roof was smothered in smoke. Their other two colleagues continued down, heading right into the dense smoke that had made others turn back. They struggled to breathe, but thankfully that smoke lasted only a floor or two. They were the last people who got out of the south tower alive. Their friends didn't make it.

Many honest people have held back on committing to Jesus because they say, "Hey, I've just known way too many Christians who were hypocrites." Maybe you've even known those who were supposed to be Christian leaders who have messed up. That's heavy smoke, blocking your view of Jesus. Hurts and painful things that have happened to you can do the same thing.

Maybe you have doubts, unanswered questions, or even anger so you won't accept Jesus' invitation to "Come to Me, all you who are weary and burdened" (Matthew 11:28).

Some people never make it to Jesus because of their pride and their self-reliance, thinking, "Hey, I've made it this far on my own. I'll take my chances with God." Our own pride can be the smoke that keeps us from the One who died for us because there's no way we could make it with God by running our life on our own.

Strangely, sometimes your religious background can even be the "smoke" that keeps you from Jesus. Maybe you have a lot of religion or even a lot of Christianity; it's easy to mistake having Christianity for having Christ and to depend on yourself rather than depending on Jesus.

The Word of God clears away the smoke. Two very important words are "Follow Me." Jesus said in Matthew 10:38, "Anyone who does not take his cross and follow Me is not worthy of Me." That's it. Jesus' invitation to you couldn't be plainer - "Follow Me." He didn't say follow His followers, leaders, religion, or His rules. He said "Follow Me."

It's all about what you do with Jesus. Your eternity will depend on your answer to the one question God wants you to answer: "What did you do with My Son?" Since it's all about Him, there's really no reason not to give yourself to the man who died for you. Don't let pride cause you to miss the only way out.