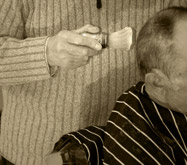 Barber shops are really "Guy's World" because you don't usually see many females and you won't find much talking. If you ask most women, part of the problem in relationships is this guy thing called "not much talking," or at least not much talking about what's really going on inside. Guys will talk about work, sports, cars, and other "stuff," but too many men just don't talk much about what they're feeling, what they need, what's hurting, what they're hoping for, or what's wrong.

It was never meant to be this way. Just go back to the creation of guys. Adam was king of his domain in the Garden of Eden, managing things for His Creator. Even with all of that, according to Genesis 2:18 in God's Word, "The Lord God said, 'It is not good for the man to be alone. I will make a helper suitable for him.'" God created woman because a man's work and achievements could never be enough to complete him; he needed relationship. He needed someone outside of himself to share his life.

Man was never meant to be an island, keeping everything to himself. We were never meant to be a Lone Ranger, wearing a mask to cover up our identity. God made us to need a shared life. Sadly, a lot of men have somewhere bought the lie that manhood means keeping your deepest feelings to yourself. Some got it from a father who seldom let anyone into what was behind his macho mask. If you had a dad like that, you know how frustrating it was to never really know where you stood with him and to wish that he would express his love, his approval, his joy, and even his hurts to you. Men tend to grow up and repeat the cycle and do it to those they love.

The people who love you and the people you love desperately need for you to express your tenderness, your hurts, your expectations, and your needs. If you could just risk letting them know that you don't have it all together and that sometimes you're weak, you struggle, and you're unsure, it would open up a depth of closeness and healing you never thought you could experience.

If you're a woman in the life of a man who struggles to express his feelings, be very careful when he does. Some men don't say it because of the harsh things that happen when they do.

Men who don't talk much and who don't express what's inside end up leaving a painful trail of tears around them - frustrated sons, wives who don't know where they stand, daughters who are love-starved and unsure of her father's love. Jesus can set men free to feel, to forgive, and to love. Experience Jesus' love and forgiveness and accept for yourself His sacrifice on the cross for your sins.

You don't have to be so lonely, so full of hurt built up inside. The man who risks letting people inside is a man who is finally free and a man who is giving the people he loves one of the greatest gifts he can give them - himself.