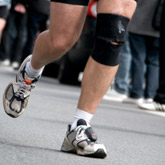 There are many today who know the disappointment, and maybe even the shame, of a serious fall. Do you give up, or do you fight back?

Usually the most watched event of the Winter Olympics every four years is the women's figure skating competition. At the 2006 Games in Italy, a lot of America's hopes for a gold medal were riding on Sasha Cohen after she managed a thin, first-place edge after the initial short program. Then came the decisive long skating program. Suddenly, all hopes of any medal seemed to disappear with a major fall early in her program. With a major deficit in her score from her fall, Sasha Cohen could have easily lost heart, but she didn't. She fought back with a strong and impressive showing in the rest of her performance. When the rest of the world's best had all skated, the young woman who had fallen and seemed to have forfeited any hope of being a champion stood on that podium with a coveted silver medal.

You could also look at what happened with Jesus' disciple, Simon Peter, to see what Jesus wants to do after you've failed. In Luke 5:4-6, we see what happened after Simon's all-out fishing effort ended in a discouraging and total failure. Then Jesus came aboard and said, "'Put out into deep water, and let down the nets for a catch.' Simon answered, 'Master, we've worked hard all night and haven't caught anything.'" Some might translate that to say, "Hey, I gave it my best shot. I failed. What's the use of trying again, Lord?" Maybe you know that feeling.

The story doesn't end there. Simon said to Jesus, "But because You say so, I will let down the nets." That could be translated to say, "I feel like giving up, but I'm going to get back in the game for only one reason. Jesus wants me to." This time there's one big difference: Jesus is in command. What was the result? "They caught such a large number of fish that their nets began to break."

Simon's greatest catch came right on the heels of one of his greatest fishing failures, because this time he's not in command. Jesus is in command. Later, when this same man has shamefully failed his Savior by going AWOL when Jesus needed Him the most, he rebounds to great spiritual leadership, including the day he helped 3,000 people come to Jesus. Because Peter at the wheel ended up in his greatest crash, so in his shame, he gave Jesus the wheel and Simon Peter finished a champion.

You've seen what you can do and sometimes it doesn't have a happy ending. Now it's time to see what God can do. Jesus made this promise: "For I will forgive their wickedness and will remember their sins no more" (Hebrews 8:12). He's told us, "If we confess our sins, He is faithful and just and will forgive us our sins and purify us from all unrighteousness" (1 John 1:9). That sounds like a fresh start or another chance, doesn't it? Simon failed, Moses failed, and yet God still had something very important for them to do for Him once they repented and surrendered their brokenness to Him. He wants to do that for you today.

With Jesus, failure never has to be final. If you will, in the strength of Christ, fight back from your fall, you can stand on heaven's podium and hear your Savior's cherished words, "Well done, good and faithful servant."