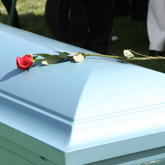 A train began its journey headed for a popular resort area along the Indian Ocean. The train never made it. It was suddenly hit by a massive wall of water - the killer tsunami that devastated so much of South Asia in December of 2004. The force of the waves tore the wheels off of some cars and leveled the train in a grove of palm trees. In one of those countless heart-wrenching scenes that came out of the tsunami aftermath, one young man at the train site wept in the arms of his friends as the body of his girlfriend was buried. He spoke out to this sweetheart who had died on that train: "Is this the fate we hoped for?" Then, as he began to sob even more, he said, "My darling, you were the only hope for me."

It's hard to think of a more devastating feeling than losing what you had put all your hope in. It's a feeling you may know if you've lost your health, the love of your life, your job, an anchor person in your life, the thing you've invested so much in, or the person that's been the glue sort of holding your life together. Many have been told by their marriage partner of decades, "I don't love you anymore" and are left to feel crushed inside.

So many of us have either lost or will lose someone or something that we had put a lot of our hope in. Hope is often snatched away by death, divorce, desertion, disease, and disaster. Suddenly, our life is thrown into confusion, anxiety, and even despair. What we need is something to put our hope in that is "unloseable," something that can't be touched by death, disease, divorce, or disaster, and something that will never desert us. Actually, there is Someone who will never desert us. Surprisingly, many people have discovered in losing the source of their hope, they finally found the one hope they can never lose. It could happen to you today.

That hope is spelled out so beautifully in Psalm 62:1-2 and verse 5 of the Word of God: "My soul finds rest in God alone; my salvation comes from him. He alone is my rock and my salvation; he is my fortress; I will never be shaken ... Find rest, O my soul, in God alone; my hope comes from him." The only life-anchor, the only life-hope you can never lose is a personal love relationship with God - God alone.

It's not a religion, but a relationship. It's possible to have a lot of religion and totally miss the relationship with God that you were made for. Any hope we get from anyone or anything on earth is just an unsatisfying substitute for belonging to God. When you belong to Him and you know you do, your soul finally can, as the psalmist said, "rest." Until you belong to God, your soul is restless.

That unloseable relationship with God comes because we're away from the God we need so much. We are away from Him by our choice, not His. We've repeatedly chosen our way instead of His way and we've built an eternal wall between us and Him. It's a wall that God Himself acted to tear down by sending His only Son, Jesus, to pay for all our sins when He died on the cross. That's how much He loves you. That's how much He wants you. You've got to want Him in your life enough to say, "I'm sorry for my sin, God. I don't want to be this way anymore. I'm putting all my hope and trust in Your Son who gave His life so I could belong to You."

The hope you've lost and the emptiness you feel can lead you today to the hope you'll never lose - His name is Jesus.