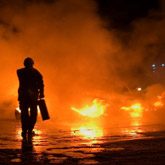 It injured more than 1,000 people, emptied out those buildings, and ripped a hole a hundred feet across and three stories deep. A few minutes after the explosion, Kevin Shea and his fire company pulled up. He had already been decorated for heroism in the line of duty, and he was now inching his way across the parking garage of the World Trade Center. Suddenly, the concrete beneath him gave way, and he fell four floors into this crater left by the bomb. His partner saw it, and as he looked into the crater, he just saw roaring flames down there. He said, "I saw his feet, and it looked like he was falling into hell." There is only one reason Kevin Shea didn't die that day.

That day, firefighter Kevin Shea landed on a pile of office room dividers, which broke his fall as well as his left knee and foot. In the fall, he lost his helmet and his face mask. The flames were coming his way. Later he said, "Rocks and cinders were falling everywhere, and I thought this is it, and I prayed to God just to take me quick." Lieutenant Joe Ward lowered himself right into that fiery crater, and by the glow of the flames, he found Kevin Shea. He reached out a hand to rescue him, and hoisted him to safety. Someone came to where he was, faced the fire, and brought him back.

That is what the Son of God did for us. A prophet, speaking of Christ, writes in Isaiah 53:5 of the Bible, "He was pierced for our transgressions, he was crushed for our iniquities; the punishment that brought us peace was upon him, and by his wounds we are healed. We all, like sheep, have gone astray, each of us has turned to his own way; and the Lord has laid on him the iniquity of us all."

The Bible makes it clear that, like sheep that are away from their shepherd, we are away from God. Every one of us has turned to our own way. Romans 6:23 says that there is a death penalty and that "The wages of sin is death." Literally, we are falling into hell. No matter how good you have been, you have run your own life. You have a sin bill and no way to pay it. No religion can ever pay it. The only way to pay it is to be away from God forever, and that's hell.

You have a rescuer. Someone is coming in your direction through the fire. It is God's only Son. He knows you will never make it to Him, so He comes to you and your world. He will face your fire. He took your hell as He died on the cross. The punishment that brought you peace was upon Him, and He died so you don't ever have to die spiritually.

Listen to the voice of Jesus reaching through the flames, offering His hand to you. John 3:16 says "God so loved the world that he gave his one and only Son, that whoever believes in him shall not perish but have eternal life." Believe - that is what that fallen firefighter did that day. Grab the rescuer because He is your only hope. Don't reject the hand of the One who loves you enough to face your fire so you don't have to.