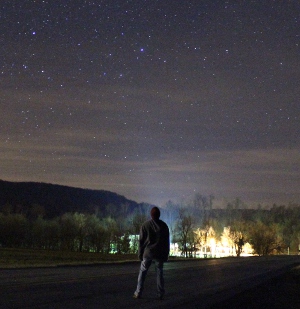 If you've looked up at the night sky recently and thought about all those galaxies out there, or looked out over the majesty of the ocean or the mountains, you can get to feeling kind of small. The God who made all that can seem pretty far away. That's too bad because, in so many ways, you really need God to be close right now, don't you? For the challenges you're facing, for the love you need, for the peace, or for the answers that only God can give you.

We need Him to come close and to come to our level, and He has. You may be on the edge of a personal love relationship with your Creator that will unlock the rest of your life. The Word of God in John 1:14 says, speaking of the Son of God, "The Word became flesh and made His dwelling among us." God came here - not as an angel or a spirit, but as a man - and His name was Jesus. He's lived in poverty, He's lived rejection, He's lived betrayal and hurt, and He has even died a brutal death.

Why? So He could make the promise that comes a couple of verses earlier, "To all who did receive Him (that's Jesus), to those who believed in His name, He gave the right to become children of God." We're talking about an intimate Father-son or Father-daughter relationship - not with a Father who's like your father on earth, but who's the kind of Father you've always wanted to have.

There was no way you could ever belong to the God of the universe, unless there was some way to remove the sin that separates every one of us from Him. That's what was happening when Jesus was dying on the cross. He was absorbing all the punishment for all the wrong things you've ever done. When you open up your life to Him, you become God's girl or boy.

Maybe, after what you've been through, you find it hard to trust anybody, including God. You're willing to believe Jesus' beliefs or to go to His meetings, but you've never really trusted yourself totally to Him. He is the first person you finally can trust totally, because He's come down so far to love you. He died for you. He will never do you wrong.

He's coming close right now. He's coming to you where you are. He's inviting you to be His, so don't go one more day without Him. Just tell Him, "Lord, I want to belong to You. I turn from running my own life, and I'm grabbing You with both hands - my only hope as my rescuer from my sin.

You believe in God's son, Jesus, but maybe you don't belong to Him. That could change this very day. He's close right now, so grab Him while He's close.