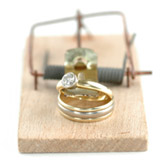 A lot of young women complain about a condition they find rampant in young men these days - commitment phobia. A guy is willing to show interest and he's willing to date a girl, charm her, agree with her, spend money on her, and they reach a level of mutual compatibility. Then, on the edge of commitment, he's gone.

Here's what Jesus said in some of the most unsettling words He ever spoke, "Not everyone who says to Me, 'Lord, Lord' will enter the Kingdom of heaven, but only he who does the will of My Father who is in heaven. Many will say to Me on that day, 'Lord, Lord, did we not prophesy in Your name, and in Your name drive out demons and perform many miracles? Then I will tell them plainly, 'I never knew you. Away from Me" (Matthew 7:21-23).

Wow! So near, and yet so far. This is a warning for religious people - people who know the verses, people who are busy in Christian things, maybe even in Christian leadership. These chilling words will be spoken to some of those people, "I never knew you." They might think they belong to Him, but Jesus knows otherwise. It's like the guy who knows about a girl. He's compatible with her and he agrees with her, but he somehow missed the commitment part. They aren't automatically married; both the guy and the girl have to make a lifetime commitment.

There are five things you can do with Jesus.

If you choose any of those first four, they all end up in the same place. There's a big difference in rejecting Christ and agreeing with Him, but all of those choices lead you to hear the same words, "I never knew you" because agreement isn't commitment. If you agree with your spouse on things, that's not what makes you married.

Just because you agree with all of Jesus' teachings and you believe everything about Him doesn't make you really His. It isn't until the day you make your own personal visit up that hill where God's Son is paying for your sin on the cross. He's saying, "Father, forgive them," and He's forgiving you. There has to be a day when you put all your hopes on Jesus, and you change your way for His way forever.

Maybe there's never been that day for you, even though you know all about Him, Christ is in your head but He's not in your heart. It's time to move Him to your heart and make sure you belong to Him. Listen to His Holy Spirit speaking to you right now saying, "You're near, but still so far away." You agree with Him, you work for Him, and maybe you sing about Him, but you're missing Jesus. You have Christianity but maybe you don't have Him. If you want that to change, let this be the day you simply say, "Jesus, I'm really yours."

Get it settled today, because it takes your personal commitment to really belong to Him.