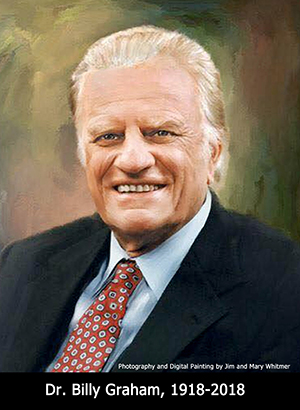 Bottom line, Billy Graham was a farm boy who became a preacher.

But his death is obviously a big deal. Because his life was a big deal.

How many preachers have been on Americans' "Ten Most Admired" list more years than any other person? What was it about him that gave him the unofficial title, "America's Pastor"?

And how is it that he was a spiritual advisor to 12 American Presidents and countless world leaders? And so respected that his body lay in honor in the Rotunda of the United States Capitol - only the fourth private citizen ever to be revered in that way.

His passing is more than a news item for me. It hit me personally. I've had the great privilege of meeting Billy Graham, and of working with him and his team in a number of ministry projects over some 30 years.

In every contact, his life rang true. He was never about himself, but always about you. He defied the racism of his time with groundbreaking inclusion of African-Americans on his team and in his meetings. He was genuinely uncomfortable with anything that smacked of him being a celebrity. He always deflected praise away from himself to God and to his team.

He lived modestly and kept a great distance between him and donations to his ministry. He will, in fact, lie in honor at the U.S. Capitol in a $200 wooden casket made by prison inmates. When he made mistakes, he admitted it openly and asked for forgiveness. With all the scandals around televangelists, nobody has been more scrutinized by press trying to find some moral or financial flaw. He passed every test.

So he wasn't just a big deal. He was the real deal. But still, what was it about Billy Graham that made him one of the most respected, most sought-after men of our time?

I've given that a lot of thought the past couple of days. And while he was clearly a compelling communicator, it seems that the power of Billy Graham's life was his message. A message that stripped away all the categories that define us and exposed our deepest need. And our greatest hope.

From Hollywood stars to homeless folks, from Presidents to prisoners, from the most religious to the most reprobate, we are suffering, Billy would say, from "cosmic loneliness."

It's that haunting hole in our heart that no relationship, no accomplishment, no experience can fill. Because it's a God-sized hole. We're lonely for the God who made us. Billy Graham said he found that incurable emptiness in the hearts of people around the world.

Billy Graham would have been the first to admit the problems with Christianity. And with Christians - who either don't walk the talk or who seem more condemning than loving.

But it was Jesus who had captured Billy Graham's heart. And who was the heart of the message he carried around the world.

He would often say, "If you can remember only one thing I say, please remember this: 'God...loves...you.'"

He spoke of a love so incomprehensible where "God so loved the world that He gave His one and only Son that whoever believes in Him will not perish, but will have eternal life" (John 3:16). And Billy Graham spoke of a power so unstoppable that Jesus literally walked out of His grave under His own power.

He wanted for people what Jesus wants for us - a personal love relationship with the God who made us. Who paid the price for us on that cross. Across the country, around the world, he extended the invitation Jesus Himself extends - "Come to Me...and I will give you rest" (Matthew 11:28). An invitation that millions point to as the beginning of being free...of being forgiven...of finally finding peace.

The messenger is gone now. But the Message remains. And the invitation is still open. Because it never was about Billy Graham. It was - and is - all about Jesus.