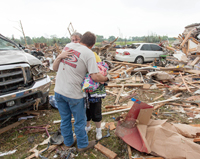 A daughter who survived that twister quoted Job, the Biblical man who lost everything. "The Lord gives and the Lord takes away. Blessed be the name of the Lord." Somehow, her faith is sustaining her amid a horrific loss.

But others responded with tragedy's frequent heart cry.

We try to make sense of the shattered pieces of our life. We can't.

We want answers from God. Sometimes "Why God?" is a cry for help. Sometimes it's more of an angry accusation.

But it may be the wrong question.

I think most of the "whys" are hard to see in the middle of the pain.

God's working on the much larger tapestry that my thread's a part of. And the thread often cannot make sense without the big tapestry. Which we won't see for a while. Maybe not until God shows it to us Himself some day.

But there is a question I've resorted to in the dark valleys. A question with some answers - sooner rather than later.

Turning from God in our devastation erases any hope of the suffering having meaning. That road takes us to dark places of bitterness and despair.

Turning to God is the only road to hope when we have no answers.

I saw my parents heartbroken when my baby brother died. But I saw their lives totally transformed when their grief drove them to the God who had been a stranger to them before.

So from a very early age, I saw that there is purpose in the pain. I know that it's been grief and pain that have taught this spoiled only child the meaning of compassion. As the Bible says, "We comfort those in any trouble with the comfort we ourselves have received from God" (2 Corinthians 1:4).

People who know what it is to be broken have the credentials to be healers in a hurting world.

And, like my parents, our darkest hour may be when we find the Light as never before. In the God who came from a perfect heaven to be broken by the people He made.

"He was crushed...He was pierced...a man of sorrows, familiar with suffering" (Isaiah 53:3, 5). Paying my bill with God so I wouldn't have to pay it forever. Choosing to die so I could live.

A God who "gets" us. Who's lived our grief. Who carries us when we can't take another step.

When our shattered soul reaches in desperation for this God who hung on a cross, we find what that old song describes.