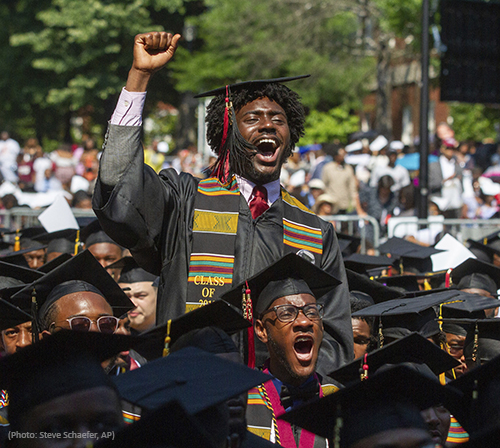 Lots of commencement speeches this time of year. Most of them, pretty predictable. "Live up to your potential." "Follow your dreams." "The sky's the limit."

But there has never been a commencement speech like the one at Morehouse College this year. Billionaire businessman Robert Smith set 396 graduates free in one day.

Reflecting on the long history of an African-American family, he announced that "on behalf of the eight generations of my family who have been in this country, we're going to put a little fuel in your bus." More like rocket fuel! In one breathtaking moment, he suddenly announced that his family was creating a grant that would pay the student loans of every graduate!

What a moment! The dreaded debt just beyond the degree - suddenly gone!

In the case of one graduate I heard interviewed, those loans amounted to $200,000! Paid for. In a day.

Once he got past the shock of what he had just heard, he literally began jumping up and down. And shouting out loud, "I'm debt free! I'm debt free! Thank God!" The interviewer said simply, "This is life-changing for you."

Now I've certainly never been to a graduation like that one. But I understand the crazy joy of people who've had their debt erased in a day. A much larger debt than any of them could pay in a lifetime. I know. I'm one of them.

The announcement that has set millions free from the most crushing debt of all was made in three words...

Jesus made that announcement. As He died an undeserved death on an unthinkable cross.

Those three words were just one word in the language of the day. "Tetelestai." Archaeologists found that word carved on stone tablet receipts in an ancient accountant's office. It meant, "paid in full."

Jesus was paying the biggest, most consequential debt I owe. Because I owe the very God who gave me my life. Because I hijacked that life from my Creator and, in essence, declared myself the god of what I did with His gift. Or, as the Bible says, "All of us have wandered away like sheep. Each of us has turned to his own way" (Isaiah 53:6).

"All of us," it says. Ignoring Him. Pushing the Creator of the universe to the edge of our life. And ending up with a wall between us and Him. So "your sins have separated you from God" (Isaiah 59:2).

I think we already knew that. Because we do things to try to make it right with God. After all, why do we bother with religion and trying to do some good deeds? Maybe we're hoping to somehow pay down our moral debt from a life lived "my way" instead of His way.

But we're in too deep to ever be able to pay for our cosmic rebellion. Because "the wages of sin is death" (Romans 6:23). He's a perfect God. I'm a serial sinner. All the good I could ever do can't pay my death penalty. Somebody has to die.

"Finished." On that day when He took my debt. And became, on that cross, both debtor and deliverer.

He might as well have been looking straight at me when He spoke those three liberating words.

It is this unspeakable love that has won my heart. And the hearts of millions who carried with them to that cross their backpack full of rocks - filled with all the guilt, the shame, the regrets, the sin of a lifetime. Debtors who left that cross with the backpack gone. Their sins forgiven. Their debt erased. And their eternity secure because the One who paid their debt then conquered death by walking out of His grave - and now into their life.

I've experienced it myself. And I've been there when countless people have put their faith in the One who paid their debt with His life. And it's like they're ready to shout, "I'm debt free! Thank God!"

"It feels like a hundred-pound weight has been lifted off my back!"

Yes, it does. And yes, it is life-changing. I am free. I am forgiven. I am going to heaven.

The debt is gone. Paid in full.