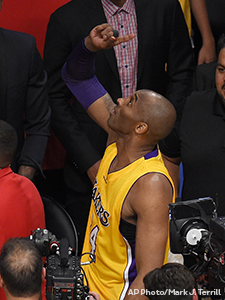 Kobe Bryant decided to set off some fireworks for his final game in the NBA.

Sixty points! Carrying his team to an unlikely - and dramatic - victory. Way to wrap up 20 seasons, with five championship rings!

Kobe Bryant finished well - and went out in a blaze of glory.

But so is my friend Kenny. Not on a basketball court. But in his hospice room.

The doctors say he doesn't have much more time. He is, as the Bible says, walking "through the valley of the shadow of death" (Psalm 23:4).

His wife Mary Ann spoke to me about this painful journey with a strength that could only be described as supernatural. She said, "For a long time, one of my greatest fears has been living life without Kenny." Theirs has been a true - and obvious - lifetime love.

But her report was amazing. "We are doing so well...God has moved in amazing ways...Kenny is calm and comfortable and I feel so much peace and calm...Kenny is ready to go with Jesus and I am ready to let him go." Then she summed it all up in one word.

As the thing she had feared so long now loomed as a reality, a peace, not of earth, flooded into her soul. And suddenly, she had grace to say, "He's Yours, Lord. I release him to You." Miracle.

But what she told me about Kenny was what really wiped me out. She described the scene in his room, with children and grandchildren singing and talking and laughing. She said the hospice staff had seldom, if ever, seen anyone facing death with such peace and confidence and joy.

Then - describing what his grandchildren were experiencing - she made this moving observation: "He's teaching them how to die."

I had a friend who said, "If people who don't know Jesus want to know the difference He makes, let them come to our funerals."

Yes. Or our hospice room.

Kenny and Mary Ann would tell you in a word why death has lost its dread. Jesus.

Years ago, they heard how the Son of God bled out His life so we could live forever. Because there was no other way we could. The Bible sure makes that clear: "Your sins have cut you off from God" (Isaiah 59:2, NLT). Sinless God. Perfect heaven. Sinful us.

Kenny and Mary Ann told me they had been religious folks. Thinking that would get them to heaven. Until they realized that no amount of goodness could pay sin's death penalty. Somebody had to die. Somebody did. "Christ died" - the Bible proclaims - "for us sinners" (Romans 5:6). Taking our hell so we could go to His heaven.

So when Jesus walked out of His grave that Easter morning, He guaranteed eternal life to all who belong to Him. And Kenny does. So, he's doing in the face of death what he's done his whole life - radiating a living Christ.

He's walking through the valley of the shadow of death. But he "fears no evil." Because, "You are with me" (Psalm 23:4). Doing life with Jesus. Doing eternity with Jesus.

That's what I call going out in a blaze of glory.