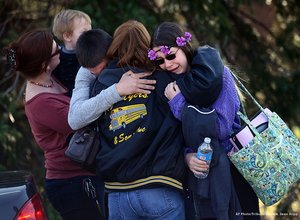 This time it was knives.

A student rampaged through the halls of Franklin Regional High School, slashing with two long knives. Leaving a trail of blood and 22 wounded victims.

So Murrysville, Pa. joins the list no one wants to be on. Like Newtown, Fort Hood - places where one angry person changes lives and families forever.

It's too soon to know what triggered this bloodshed. But it's a good bet that anger was once again a big part of it. In fact, anger's at the root of most of the explosions we hear about in the headlines.

And lots more that never make it to the headlines.

Often the trigger turns out to be something relatively small. The final drop that made a glassful of anger overflow. And there are always victims. Occasionally bleeding outside. Almost always bleeding on the inside.

As the world's best-seller, the Bible, says: "Reckless words pierce like a sword." And "the tongue has the power of life and death."

But behind the guns and the knives, the verbal sword is the deeper issue. The ticking time bomb of seething anger inside. Which seems more widespread than ever. Making once "safe" places increasingly more dangerous.

We need some ways to defuse the bomb inside.

1. Unload your pain before you explode your pain.

Behind our anger is almost always hurt. Over mistreatment. Failure. Frustration over a relationship. Feeling attacked or excluded. Crushed dreams. Circumstances beyond our control. And stored-up hurt morphs into the ticking time bomb of rage.

Unless you unload it. Not in a blast of anger that scars often innocent victims. But by facing your deepest hurts with someone you can trust. A family member or friend. A counselor or pastor.

But say it. Don't stuff it. Where it feeds the ugly anger monster.

2. Reach out to the people in the shadows.

The shy ones. The people who seem to be saying, "Leave me alone." That person who's negative...mean...or left out. It is the people who feel isolated - sometimes by their own actions - who need us the most. It's the most unloveable who need our love the most.

3. Let God into the darkness.

There's only so much people can do to heal our wounds and defuse the ticking bomb. I met a man recently whose anger from what's happening in every part of his life had brought him, as he said, to "the end of my rope." That day he poured it all out. First to me. Then to God. I could listen. God could heal. And the healing has begun.

Yes, it's risky to let someone into the room in our soul where the hurt and anger are stored.

But it's a whole lot more risky not to.

I need - I think everyone needs - a place to go with the wounds and feelings that have no words. I found that place...in the God who "gets" me. Because He's been here. As a victim of the worst of human injustice and brutality. On that first Good Friday.

Jesus is the God who understands. Who loves me enough to die for every wrong thing, every hurting thing I've ever done.

He is my one safe place.