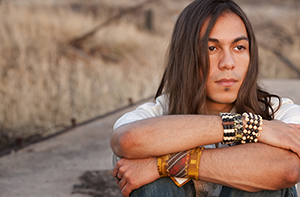 They're in all the paintings of the First Thanksgiving. And all the season's grade school plays.

We invited them to dinner that historic day.

Then we forgot them.

And today their monumental battle to survive is nowhere on our radar. Take the suicides of young Native Americans, for example. Happening again and again in Native communities. With a suicide rate at least three times of the rest of the nation - skyrocketing to seven and ten times greater in some areas.

If suicides were happening like this in your community or mine, it would be Page One. It's happening all over in indigenous communities - and no one notices.

The same is true of the staggering rates of sexual abuse, sexual violence against women, drug and alcohol addictions.

But we never hear the cries. This country's Original People are its Forgotten People.

And its almost Lost People. There were an estimated ten million Native Americans here when Columbus came. By 1900, there were 200,000.

After near annihilation, the surviving Native children were shipped across the country to "boarding schools" to make them "white." Many were sexually abused. Families were shattered.

Oh, the reminders of who was here first are all over the land - from a river called Mississippi to a city named Chicago to states known as Massachusetts or Ohio.

Their legacy is on our dinner table every time we eat corn or tomatoes, pumpkin pie or chocolate. Their model of governing inspired our Founding Fathers - in the very ideas of a federal government that shaped our nation.

They're in our military cemeteries - because they have fought in every war and served at rates proportionately higher than any other ethnic group in the country.

But to most of us, they're invisible. Their contributions ... their potential ... their despair ... their pain.

Two thousand years ago, God sent a Rescuer to be the hope for a world of lost and broken humans. His Son. Jesus. He came as a brown-skinned, tribal man, growing up on land that had been taken by others. Living homeless, dying violently. Living a story so much like our First Nations.

But He rose from the dead. He did not come to be, as Native people have believed so long, just "the white man's God." He came to be every man's Savior. "The way, the truth and the life," He said. The One without whom "no one comes to the Father." The only One who paid the death penalty for our sins. The only One who conquered death and can guarantee eternal life.

Pilgrim Governor William Bradford said "they cherished a great hope" when they sailed to this new land. "Laying good foundations for the advance of the gospel of the kingdom of Christ." They wanted the people here to have the same opportunity to know about Jesus that they had been given.

Only an estimated 4% of Native people know this One who is, for all of us, our only real Hope. Too many of God's people have forgotten them, too.

Over 30 years ago, God showed me the Forgotten People, and my life has never been the same. I have eaten at their tables, learned from their wisdom, been to their funerals – too many being young.

And I have seen what hope looks like. In the power of a new generation of indigenous warriors. Spiritual warriors. Fighting for their people in the name of the Jesus who has rescued them from suicide, addictions, and the cycle of choices driven by hopelessness. I have traveled with them to a hundred reservations and have seen hope break out as they tell their stories of hope. They have lived the hopelessness. They are the messengers of Hope who will be heard.

Forty years ago, Dr. Billy Graham said, "The Native American is a sleeping giant. He is awakening. The original Americans could become the evangelists who will help win America for Christ."

Wouldn't that be just like God! The people forgotten by everyone but Him - to help bring healing. The people He put here first. The people to whom He is saying ...