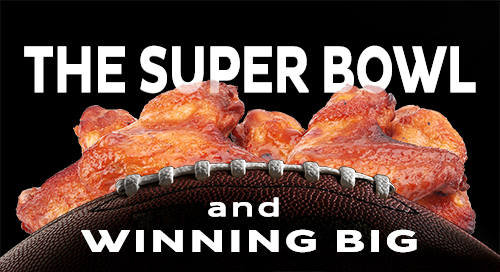 This Sunday, Broncos and Panthers will be fighting it out.

And some 100 million Americans will be watching it happen at Super Bowl 50. Something like one out of three Americans.

They'll watch high-rolling, 30-second commercials that cost about 4.5 million dollars each. And gobble an estimated 1.3 billion chicken wings! On the second-largest eating day of the year.

In addition, it will be aired in some 225 countries! When you win, you've got a world of people watching. And when you lose.

Thinking of all those people who will simultaneously witness a single mega-event, I couldn't help but think of what promises to be the most-watched spectacle in history. By far.

Calling the plays that day will be the Man whose birth split history in two. Jesus Christ. No ticket or TV needed to see it.

The Bible reveals "He is coming with the clouds, and every eye will see Him" ... "They will see the Son of Man coming...with power and great glory" (Revelation 1:7; Luke 21:27). The greatest spectacle of all time. Jesus, writing earth's final chapter. Not some disaster or weapons or world leaders. Jesus.

Jesus is my future. Your future. Everyone's future. Ready or not, here He comes.

When you study the never-wrong prophecies of the Bible, you start to see a picture of what the world will look like before Jesus comes. Also, God's Word is clear that no one is able to know when Jesus is coming back. But many who know the Bible believe the world has never looked more like the world Jesus said He would return to than it does now.

For those who follow Him, the Bible describes "ready" two ways. First, "Remain in fellowship with Christ so that when He returns, you will be full of courage and not shrink back from Him in shame" (1 John 2:28). Translation: don't be doing anything you'd be ashamed of when Jesus shows up. Do every day close to Him so His arrival in person will be the culmination of everything you've lived for.

You're ready to meet Him. You know someone who isn't. It's time you told them about the Man who died for them. With your eye on the game clock. Ticking down. It's time to throw caution to the wind. The trophy isn't a statue. It's a life. In heaven with you forever.

And for those who have never welcomed the Savior of the world to be their Savior from their sin, there's only one way to be ready. "Whoever believes in the Son has eternal life, but whoever rejects the Son will not see life" (John 3:36). When you put your life in Jesus' hands, you are safe. Forever.

Because no one will miss His coming. Or their meeting with Him. "At the name of Jesus," the Bible says, every knee will bow "and every tongue confess that Jesus Christ is Lord" (Philippians 2:10-11).

Then, no choice. He will come as Judge. Now, still time to choose Him. He's the Savior with open arms. And nail-pierced hands.

It may be our world has already heard God's two-minute warning. Then, game over. His victory complete. I can hardly wait.