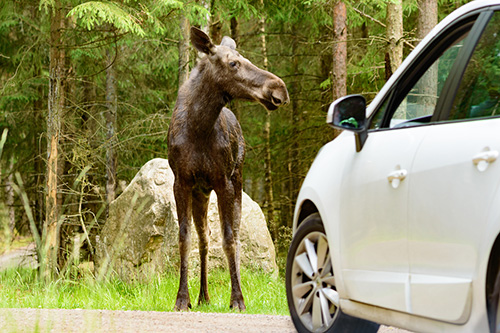 If I was back in elementary school, and they asked me to write a composition on "My Summer," I'd have one word on the paper. Amazing.

Because I spent it on Indian reservations with a team of 60 Native American young people. Who stood on rez basketball courts, pouring out their Hope Story of how Jesus has rescued them. I had a front row seat on God's awesomeness.

And then there was the moose.

Our son, who directs all our organization's Native work, was driving his rented RV back to our lodging place after a team event.

When suddenly, there was the moose. Crashing head first into the windshield on the driver's side. Shattering it completely. Propelling broken glass way back in the RV.

We raced to the scene, not knowing what to expect. There was our daughter-in-law, standing in front of that disabled RV. Repeating over and over, "God is so good! God is so good!"

Yes, He is. Even the police were amazed that there was no significant injury. Locals told me grimly, "Things like this don't usually end well."

We consider it a miracle. Miracle #1, that is.

Obviously, a lot of repairs were needed. Including re-alignment. Which meant putting the RV up on a rack.

And that's when they found it. Loose parts underneath that were not caused by the accident - and that almost surely meant disaster down the road. And the mechanic explained the real possibility that "your RV could suddenly pitch forward and roll end-over-end." With potentially deadly consequences.

When my son called to tell me about this disturbing discovery, he began with four words that, at first, seemed a little curious.

Yes, He did. To reveal what otherwise might never have been known. Until it was too late.

The Moose Mess has revealed more than problems with an RV. It sheds a whole new light on many things I run into. That all of us humans run into.

But - just as that night of the moose - God is always doing something much bigger than the thing we can see. We saw the moose. But the moose was just part of the story. The real story was God using the moose to prevent a much larger tragedy. And showing us how great His power is - and His love for us.

The Cross of Jesus wasn't good. It was awful. But what looked at the time like the greatest tragedy in human history turned out to bring about the greatest good of all. The payment for our sin that makes possible life with God forever.

So when a "moose" suddenly crashes into my life, seemingly wrecking things, I need to remember the God of the "something bigger." Who is weaving a beautiful tapestry that sometimes includes some very dark threads. And using today's mess to accomplish tomorrow's miracle.

If I can remember that, maybe I, too, will be able to say...