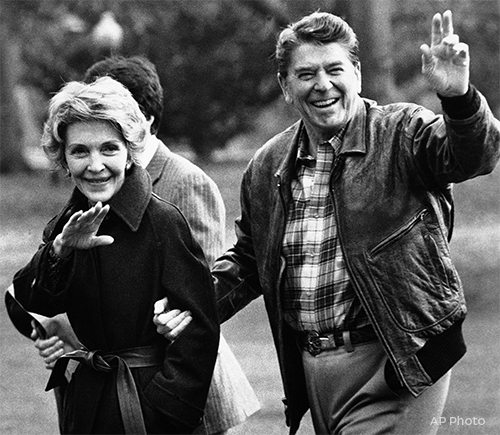 Nancy Reagan called it "the long goodbye." Her beloved husband's slow slide into the black hole of Alzheimer's Disease.

Now America is saying goodbye to her. And remembering her as a great First Lady. And a wife forever in love with her "Ronnie."

Her boundless devotion to him became almost legendary. Yes, when he was the famous Hollywood star and the transformative leader of the Western World.

But especially through his long, ten-year goodbye.

As Ronald Reagan's memory began to fade, his Nancy made sure he could still maintain the dignity of going to his Century City office.

And that's where the story comes in that has affected me profoundly ever since I read it years ago. It was in a national news magazine's special edition commemorating the late President's life.

It reported how visitors would come to visit Mr. Reagan. Slowly, conversations about the past became more and more frustrating.

First, memories of his movie star days vanished. Then, his days as governor of California. Finally, he could no longer remember even his days serving as President.

Amazingly, though, one memory remained. The one that explained a picture on his wall. The one of the river. Where Ronald Reagan made his most enduring memories.

When visitors asked him about the picture, he brightened and said, "Oh, that's the Rock River in Illinois - where I was a lifeguard." Then, the recollection that brought me up short.

Wow. Long after all the traces of his massive achievements, from Hollywood to the White House, were gone, one legacy remained.

The lives he had saved.

And so it will be for me. For all of us who follow Jesus. When every other achievement of our life has faded to dust, one will remain.

The lives we have saved.

Because we've been commanded to "rescue those who are staggering toward slaughter" and to "snatch others from the fire and save them" (Proverbs 24:11, Jude 23). We are "Christ's ambassadors" (2 Corinthians 5:20). His face, His hands, His voice to the people around us.

Like any ambassador, we carry a message from the One who assigned us. "We implore you on Christ's behalf: Be reconciled to God." I have nothing - nothing - more important to do.

Because it is a life-or-death message He's trusting us to deliver.

After all is said and done, this is what we will have to show for the life we chose to live.

The lives we have reached out to, so they could be saved.