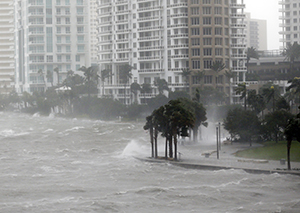 The conversation – like a lot of conversations this past week – had turned to the unprecedented weather news. I was at physical therapy as part of my recovery from shoulder surgery.

Someone brought up Hurricane Irma – one of the strongest hurricanes in recorded history. With another Category 4 storm following her across the Atlantic. Just days after Hurricane Harvey, another historic storm, which dumped the largest rainfall from a single event ever in this country. Not to mention the biggest earthquake in Mexico’s history – that story had just hit the news.

One of the "coaches" – who had been working at his desk the whole time – suddenly looked up just long enough to make one surprising comment. "About time someone started paying attention to the signs."

After all, Jesus did talk about signs that would precede His Second Coming. He talked about "great earthquakes...famines and plagues in many lands...strange signs in the sun, moon and stars...nations in turmoil, perplexed by the roaring seas and strange tides" (Luke 21). And He mentioned terror, false prophets – and added to the many Biblical indications that Israel would be a nation again before He came back.

Now I’m not interested in getting anywhere near the mistake too many people have made – naming a date when Jesus would return. He said no one would know that.

But I do believe our world looks an awful lot like the world Jesus said He would return to.

So are the recurring headlines about record-breaking disasters and an increasingly fearful world "signs?"

Signs or not, they sure are reminders. That God’s eternal game clock is counting down - to the Grand Finale of human history. When Jesus will write the final chapter and come to rule forever.

How close are we? No one knows. But I’ve made my choice. I’m going to play the rest of my life like we’ve just heard the 2-minute warning! That’s when you throw caution to the wind and go for broke. When all that matters is getting points on the board. Or in the case of us Jesus-followers, helping people we know be ready to meet Him.

More than any time in my life, I’m hearing on the news words like "apocalyptic" and "Armageddon." There’s a sense that the world seems to be spinning more and more out of control – toward some "apocalyptic" end point out there.

And that sense is right. That "point" is a Person. "Then everyone will see the Son of Man coming on a cloud with power and great glory" (Luke 21:27).

We can confidently say one thing about the future of every man and woman on this planet: "Jesus is your future." As your Savior from your sin, based on your trust in His death on the cross for you. Or as your Judge.

And there is no doubt the game clock is ticking.

And we are one day closer to God’s final announcement. "Game over."