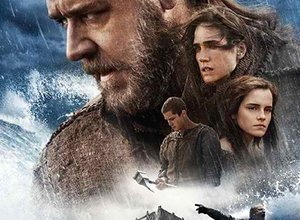 Noah's Ark rides again. And this time Hollywood's hoping it will bring in a flood. Of money. As a blockbuster movie.

Word is that this telling of the iconic story starts with the Bible account. And adds a heavy dose of Hollywood imagination. With great special effects. Probably no match, though, for the original.

With Noah showing up in ads on TV all the time, it's made me go back to the non-fiction, original narrative. Bible-style.

And I found more than a story. I found insights as current as today's news. If old Noah showed up today, he'd be blown away by all that's changed.

And all that hasn't.

Like the five game-changers I found. For any generation.

1. God still has His Noahs.

The original Story says, "Noah was a righteous man...and he walked in close fellowship with God." The moral heroes in any generation are the ones who stand for what's right when no one else is. Even when they stand alone. They're rare, but like uncommon collectibles, they're really valuable. And "Noah found favor in the eyes of the Lord."

In the Bible's words, "The Lord observed the extent of human wickedness on the earth...that the earth had become corrupt and was filled with violence." He'd set boundaries. They didn't care. Sounds familiar.

The culture doesn't decide what's right. Polls or politicians may tell us what's politically correct. But not what's wrong. That's up to the One who put us here. We may not think we're out of bounds. Like Noah's contemporaries, we can always find a way to justify our "I don't care what You say, God."

But His boundaries don't move. He's God. And I'm pretty sure He reacts to our rebellion the same way He did in Noah's time. "It broke His heart."

3. God still has penalties for going out of bounds.

God promised Noah He wouldn't do the flood thing again. But there must be a Judgment Day. I think a lot of us know that deep down anyway. When I dethrone God and crown me #1 in my life, it messes up everything. And invites judgment. I'll bet the Noah Gen folks told Noah, "We're getting away with it, old man." They were wrong.

A safe place. Noah and his family "went on board the boat to escape the flood." Like countless people over 2,000 years, I ran to the Haven God's provided from His judgment. Not a ship. But a Savior. Because "there is now no condemnation (I'm safe!) for those who are in Christ Jesus."

In the biblical account, God says, "This rainbow is a sign...Never again will the floodwaters destroy all life." A guaranteed future. Anchored to a promise.

I know that feeling. "Anyone who believes in God's Son has eternal life." It doesn't get any better than that.

So, as the cultural spotlight focuses on big screen Noah, I wonder how many moviegoers will do what I did and check out the original story. If they do, they'll be surprised at what's there.

The biblical account is taken from the Book of Genesis, chapters 6-9 (NLT).