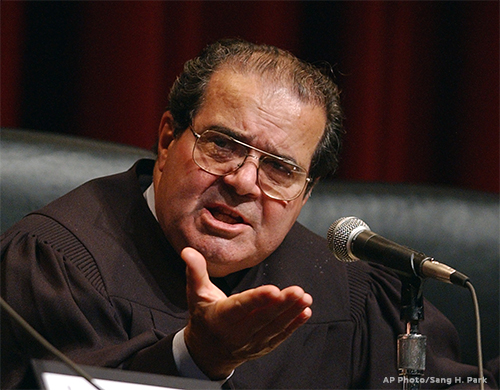 Everywhere I've gone today, the flags are at half-staff. A Supreme Court Justice has died. And that's a big deal.

Nine judges. Who never stand for election. They're on the Court until they die, retire or are impeached.

They hold so many lives in their hands as the final word on the most important, most contentious legal issues of the day. What they decide will long outlive them and the President who appointed them.

So Justice Antonin Scalia's sudden death in his sleep at a Texas resort is, indeed, a big deal. If there's any doubt, just listen to the fierce political firestorm raging over his successor.

Sadly, Justice Scalia's life and legacy are almost drowned out by the cacophony of an election year. But across the political spectrum, the consensus is that he was a judicial giant, leaving an indelible mark on the Court and the country.

But now - like all of us - even this distinguished Supreme Court Justice must stand before the Ultimate Supreme Court. Before the Chief Justice of the Universe. God Himself. Because, as the Bible reveals, "each person is destined to die, and after that comes judgment" (Hebrews 9:27 - NLT).

I don't know when my cosmic court date is. No one does. But God has stripped away some of the mystery surrounding our future judgment. There's some good news. And some bad news, as well.

1. The ground is level before the Great Judge.

"For God is no respecter of persons" (Romans 2:11). President, preacher, prisoner. Billionaire and beggar. Saint and sinner. Famous and forgotten. None of the connections, the categories, the titles, the trophies will matter. That's only bad news if I'm depending on my status on earth to affect my status in eternity.

2. Perfect justice will finally be done.

3. There will be no secrets.

"The day is coming when God, through Christ Jesus, will judge everyone's secret life" (Romans 2:12 - NLT). Good news if you've got nothing to hide. Bad news if there's something in the dark.

God "canceled the record of the charges against us and took it away by nailing it to the cross" (Colossians 2:14). This is where I lose it.

Jesus, the only one who never had any sin of His own to pay for, gave His life to pay for mine. The mangled Son of God, hanging butchered on a cross. That's what my sin cost. That's why no amount of good I can do could ever pay a price that high. And why there's only one thing God will ask on that day: "What did you do with My Son?"

As I stood condemned for the sin of a lifetime, someone stepped up and said, "Take Me instead." It was the Judge's Son!

He went to a cross. I went free.