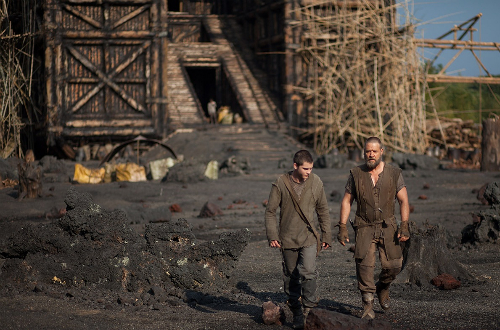 Noah really stirred things up when he was here.

Now he's doing it again. On the big screen.

Noah and his ark - the movie version - had a big launch this past weekend. Captain Noah still has the ability to be controversial.

Mostly among Bible people. Some of them are objecting to all that the movie adds to and subtracts from the original account. While others are hopeful it will interest un-Bible people in the real Story.

I find it interesting that thousands of years later, Jesus was talking about Noah.

And suggesting that when people are thinking about Noah, they should be looking for Him.

Actually, He said, "Just as it was in the days of Noah, so will it be at the coming of the Son of Man."

"For in the days before the flood, people were eating and drinking, marrying and giving in marriage, up to the day Noah entered the ark; and they knew nothing about what would happen until the flood came and took them all away. That is how it will be at the coming of the Son of Man" (Luke 17:26-27).

So Jesus establishes this linkage between Noah and the time He's coming back to earth. Worth thinking about.

Jesus used the story of Noah as a picture. Of what the world would look like on the eve of the climactic event of all human history.

His return. When, He said, "they will see the Son of Man coming on the clouds of the sky, with power and great glory" (Matthew 24:30).

So the world isn't done with Jesus Christ. He is our future.

He'll be coming to a world that's busy ignoring Him. Living for their appetites. Doing whatever they feel like.

Oblivious to the flood of God that's coming.

But invited into an ark where they can be rescued. His name is Jesus.

Jesus took only four words to tell us what it all means to each of us.

Because Jesus isn't just the future of this world. He's my future.