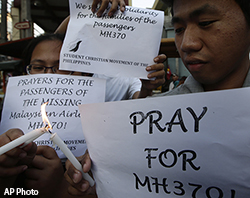 As a "frequent flyer," I've flown a lot of miles over the years. All over the world. So the eerie disappearance of Malaysia Air 370 hits a little too close to home.

I've said the sad goodbyes to my wife and children and boarded those international flights. They prayed - I prayed - that "daddy will get home safe." It looks like 239 passengers may not.

Beyond the mystery of what happened is the misery of those left behind. I've watched the unspeakable grief of the loved ones of those passengers. Waiting for word on the person they love. Watching hope slip away.

It's always painful to lose someone you love. But the suddenness of this. The devastating possibilities. The awful unanswered questions - that may never be answered.

It's deep, soul-searing pain. Even news anchors remind us to "keep them in our prayers."

For some reason, watching all this unfold took me back to another disaster that riveted the world. Over a century ago.

An unspeakable tragedy, out of the blue. Information slow in coming. No trace of many passengers. Loved ones desperate for information.

It wasn't a plane that disappeared. It was a ship.

Named Titanic. With 2,200 people aboard. The scope of the loss defied anything anyone could conceive.

And there, in Liverpool, families waited to learn the fate of someone they loved.As news filtered back from the disaster, White Star Lines notified the next of kin. By posting the name of each identified passenger on a board outside their office. With two lists.

Two groups. Only two. When they had set sail, they were first class, second class, third class and crew.

Now they were saved or lost.

As I've been exposed to God's heart as expressed in the Bible, I've realized that's how He views all of us. Whatever group we're in - ethnically, politically, religiously, socially - He sees each of us as being in one of two groups.

Here's how the Bible says it. "God has given us eternal life, and this life is in His Son." Not in Christianity. Not in any religion. In His Son. And "He who has the Son has life. He who does not have the Son of God does not have life" (1 John 5:11-12).

Because His Son did what had to be done for a sinner like me to ever go to God's heaven. God's really clear about the penalty for my cosmic defiance of my Creator's rule of my life. "The wages of sin is death" (Romans 6:23).

I once was "known to be lost."

The greatest miracle of my life is that I'm now "known to be saved."

Because God sent a Rescuer.

And I grabbed His outstretched hand.