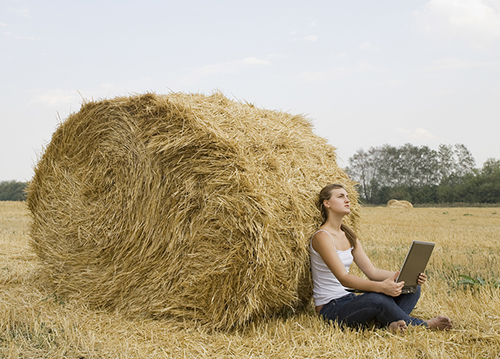 Governors' desks are vacant. Senators' offices are empty. They might as well have just put a sign on the door - "Gone to Iowa."

Not now. They're gone to New Hampshire. Then to South Carolina. In the wild and crazy 2016 Presidential election year.

For a long time, the Iowa caucuses saturated cable news. It's over, and I'm still trying to understand how that works. But there's no doubt that the road to the White House starts in the cornfields and ethanol wells of Iowa.

And then, in a single day, boom - they're all gone. Iowa's in the rear view mirror. Next primary states, here we come!

One Iowa store has some pretty funny caucus shirts. One says, "Is there a bale of hay I can interview you in front of?" Another captures the cynicism of a state that knows this Iowa-fest is over when they vote - "Don't forget to wave next time you fly over."

"We love you, Iowa - and then we leave you." After they've served their political purpose, of course.

That kind of "love ya as long as you can do something for me" is one thing when it comes to a state. But it's a broken heart when it's a person dumped by someone who said they loved them.

The "'til death do us part'" that changed to "I just don't love you anymore." The company you gave the best years of your life to that says one day, "We don't need you anymore." The people who cheered for you once are nowhere to be found now. The lover whose l-o-v-e seems more like you were u-s-e-d.

I've spent a lot of my life sharing with people the good news about love that changed my life - and millions of others. Because I'm profoundly grateful that there's a love that will never betray you, never abandon you, never die on you.

It's obviously got to be bigger than any human love. But it's a love even little kids can understand. I know. Because I sang about it a lot when I was a kid - like millions of kids still do. "Jesus loves me, this I know. For the Bible tells me so."

Yes, it does. "Nothing can ever separate us from the love of God that is in Christ Jesus our Lord" (Romans 8:39). Nothing on earth, nothing in heaven, nothing in hell, nothing in death. Jesus guaranteed, "I will never leave you or forsake you." And "I am with you always, even to the end of the age" (Hebrews 13:5; Matthew 28:20).

The more love has hurt you, the harder it is to believe that. Before that "nothing can separate us," God says, "He did not spare even His own Son for us." That's when Jesus hung on a cross, to pay the death penalty for our hijacking the running of our life from God.

If Jesus was ever going to turn His back on me, it would have been when He was going through my hell on that cross. He didn't. He went the distance for me.

He will never break my heart. His was broken for me. Jesus loves me. This I know.