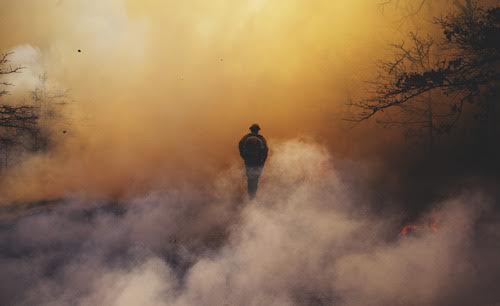 There was a miracle in the wildfire the other night. On an Indian reservation where we have many dear friends.

We've watched the news with growing concern - and intensifying prayer - as the path of the fire's destruction has grown steadily. We learned some of our "family" there have their church and some loved ones in a town surrounded by the flames.

And they told us about the miracle.

The flames were sweeping straight toward their sister's home, along with her in-laws' house next door.

But the fire stopped. It burned through the narrow yard between the two homes. And right up to the homes. But the cell phone pictures tell the story - two houses, standing untouched in a circle of charred ground and trees.

And the fire won't come back there. Because the fire cannot go where the fire has already been.

That's something Indian people have counted on for centuries as wildfires swept across the prairie. They would - with a technique familiar to modern firefighters - intentionally burn the area around their village so the approaching flames could not reach them.

Praying on the phone with our reservation friends made me think about that life-saving strategy. And the hill.

Skull Hill, they called it back then. A garbage dump where they nailed people to a cross.

It was on that hill that the fire of divine judgment fell on the only Son of God. So it would never come to me. Or a whole world of sinners like me.

Our final destiny is pretty clear when you read the Bible. "Man is destined to die once, and after that to face judgment" (Hebrews 9:27).

I hate to admit it, but it is a judgment I deserve. I have, along with all my fellow humans, essentially told my Creator, "You run the universe, God, and I'll run me, thank You." In essence, attempting to dethrone God and enthrone me.

But Jesus' unspeakable sacrifice on Skull Hill is the game-changer. "God showed His great love for us by sending Christ to die for us while we were still sinners...And since we have been made right in God's sight by the blood of Christ, He will certainly save us from God's condemnation" (Romans 5:8, 10).

I have chosen to place all my hopes for now and forever in what Jesus did on that cross. To stand at the one place where the judgment of God will never come. By that cross where Jesus took my hell so I would never have to. And "there is no condemnation to those who belong to Christ Jesus" (Romans 8:1).

His cross is the one place of safety from the fire.

Because the fire will not come where the fire has already been.