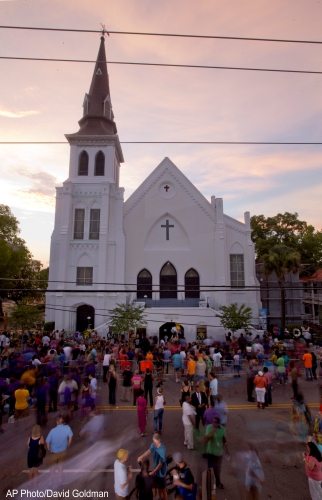 A part of my heart's been in Charleston, South Carolina the past few days. So has a part of America's heart. As the hate-driven murder of nine Christian worshipers - in the church - has devastated a city and riveted the nation. With seasoned reporters groping for words. Like "horrific." "Heartbreaking."

But even more overwhelming than the brutal crime has been the response of the families whose loved ones were murdered. "I forgive you."

News anchors were shaking their heads, trying on-air to comprehend the family members' words to the shooter. Forgiveness offered even as they wept over the cherished ones he'd taken from them.

One CNN anchor may have said it best as he stood outside the church, listening to the spontaneous hymns, reflecting on the stunning contrast between a horrific crime and a holy response.

"There is so much grace here. Amazing grace."

A young man mercilessly executing the people he'd been with for an hour of prayer and Bible study. Leaving a survivor to be sure the world heard about it. The darkness was very dark that awful night in Emanuel AME Church.

But the Light has been so much brighter! As the world watches the stark contrast between the ugliness of hate, next to the blazing light of supernatural love.

One image I will not forget is hundreds of people, packed into a sanctuary 24 hours later, singing through their tears - "We shall overcome."

They have already. Through the Savior who said, "In this world you will have trouble. But take heart! I have overcome the world" (John 16:33). So we can be "more than conquerors through Him who loved us" (Romans 8:37).

We can overcome because He has. The overcoming He makes possible is on vivid display in the agony - and triumph - of Charleston.

Hate and bitterness are cancers that eat away at our soul and chains that tie us to the very person who hurt us. Forgiving sets us free. It's not excusing the person or the offense. It's refusing to harbor bitterness or vengeance toward them in our heart. Leaving judgment where it belongs - with God.

Because, in our hearts, we've been to the cross where Jesus was slaughtered for our sin. He looks at all of us whose sin nailed Him there and cries out, "Father, forgive them!" So, "forgive as the Lord forgave you" (Colossians 3:13).

Anger and prejudice, selfishness and pride, lust and deceit. Dark corners in every human heart. "The animal inside." But, thank God, Jesus tamed that animal called sin when He allowed all its fury to be unleashed on Him. So "anyone who belongs to Christ has become a new person...a new life has begun!" (2 Corinthians 5:17).

That hope was on display for all the world to see in Charleston this week. A scale where deep grief weighed heavily on one side - and hope, born from resurrected Jesus, outweighed it on the other side.

Not erasing the pain and the tears. But overcoming it with something greater.