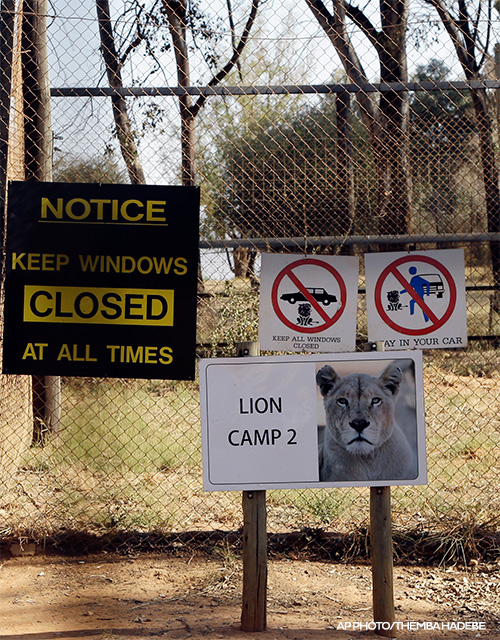 Wow, they had my attention. When the reporter started talking about a young woman being attacked by a lion. In a game park. In South Africa.

I've been to a game park in South Africa. Where lions roam freely. And the lions were an issue.

My South African friend, Ted, was driving me through this massive game reserve during a break at the conference where I was speaking. It was winter there. The grass was tall. He said, "You'll see the big animals - but not the cats. But they'll be there - in the grass."

It was amazing to drive behind two slow-moving giraffes. And ostriches. We didn't try to pass.

I'll never forget the once-in-a-lifetime sight of 30 elephants - all ages and sizes - having a family meeting right next to the road. For the first time since we entered the park, I started to get out of the car to take pictures. My friend made one comment:

When I asked him what he meant, he said, "Well, there have been four tourists mauled to death by lions in the past few months."

It's surprising what great pictures you can get through the window of a car!!! I nearly lost my head ducking back into that car!

Sadly, the young woman who was mauled to death this week hadn't even gotten out of the car. She just had her window rolled down. But a lioness - with her cubs nearby - leaped through the window to attack.

I thought about Ted's "watch your back." And how the lion that killed the woman only needed an open window.

Then a sobering picture from the Bible came back to me. A picture of the clear and present danger all of us humans face from the lion from hell. "Stay alert! Watch out for your great enemy, the devil. He prowls around like a roaring lion, looking for someone to devour" (1 Peter 5:8). And this "watch your back" from God - "Do not give the devil a foothold" (Ephesians 4:26).

The devil doesn't mind if people don't take him seriously. In fact, he prefers it. So he can be doing deadly damage before we ever realize what's happening.

And it only takes one open window for our spiritual enemy to get in. He pounces on our carelessness.

That one click to check out that website. The one night with friends who bring you down. The extended time alone with that person you have feelings for. That first thought of leaving your marriage.

It doesn't take much. One dark secret. One "white lie." Bitterness you bury. A small compromise. A little gossip. An "innocent" flirtation. The angry, wounding words. Devilish opportunities. Open windows to tragedy.

The lion from hell only needs an opening to ultimately destroy a life, a reputation, a marriage, a future. He never tells you where this little detour will take you. If you had known, you would have kept the window closed.

The lion is strong. But I am not defenseless.

My Savior is stronger. The Bible says Jesus is the "someone stronger who attacks and overpowers" the enemy of our soul (Luke 11:22). He did, in fact, "triumph" over all the forces of darkness "by His cross" (Colossians 1:15).

When He is invited into a life, He brings all the power that raised Him from the dead. He is the death-beater. The "lion tamer." Because He offered up His life to pay for human sin and break its hold.

So when the devil comes knocking, I send Jesus to the door. And I keep my windows closed.