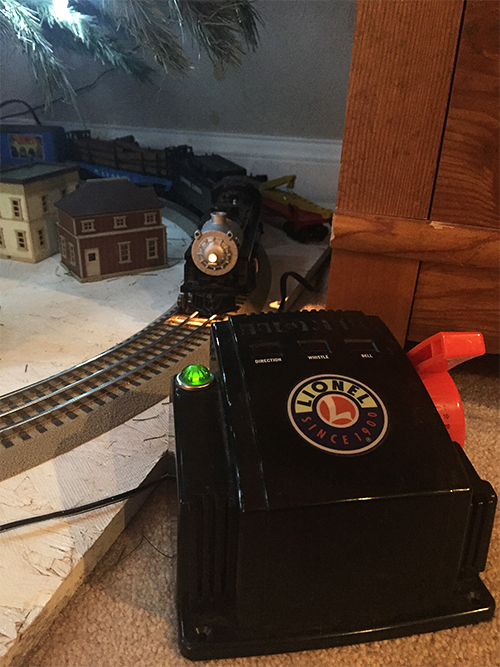 There are toys, and then there are trains. Toys are fun, but trains bring out something else. Maybe it's the feeling of nostalgia, or maybe it's the delusional thinking that I could just step on a locomotive and successfully operate it. Either way, one of my favorite moments each Christmas is when we pull out the Lionel O-Gauge and set it up under the tree.

This isn't anything new. Every Christmas while I was growing up, my dad would set up his Lionel train, and it was always amazing. I remember early on just watching as he would operate it, making stops at the station or loading the plastic cows into the cattle car.

Then the big day came - he let me drive it! As I started lifting the orange lever that made it go faster, I noticed the black line that had been drawn about two-thirds of the way up the lever. Dad had one rule: "Don't push the speed past that line." "Okay, Dad. No problem," my prepubescent voice replied.

Of course, that didn't last long. As the days went by, I got more and more curious. And the train started inching faster and faster. Then, as it was cruising at speeds I'd never attempted, the Lionel hit "Dead Man's Curve." I call it that because I knew I was a dead man as the locomotive went careening off the track.

Dad and I talked after that. I believe I even got called to "his study" (let's just say my brother was familiar with this place from low grades he had received).

Did dad let me play with the train again? Fortunately, yes. He believes in second chances (and third, and fourth, and...). But I knew not to push past the line the way I had.

I learned something important about Dad and his Lionel. He didn't put the line on the controls to keep me from having fun. He put it there because he knew that pushing too far past the line would do damage to something valuable.

As I grew older, I pushed past the line too many times - in what I would watch, in relationships, in how I handled anger. And I wound up damaging something valuable - me.

My Heavenly Father has drawn out lines for me...for everyone. Some people just grumble and call these "rules," and claim God doesn't want them to have fun. But I have lived the reason for these lines. God didn't put these in place to keep me from having fun. He put them there so that I can live a life without regret. And "enjoy life to the full" (John 10:10). If I'll live His way instead of mine.

I was pretty grateful that my dad helped me get the train going again, and gave me another shot to do it right. I'm eternally grateful that my Heavenly Father does the same. Those mistakes I made growing up? And the new ones I make? He has forgiven me and made me new. He's right there to help me get back on track, to forgive me, and to help me get it right the next time.

The more I live, the more thankful I am for those lines.

"This means that anyone who belongs to Christ has become a new person. The old life is gone; a new life has begun!" (2 Corinthians 5:17)