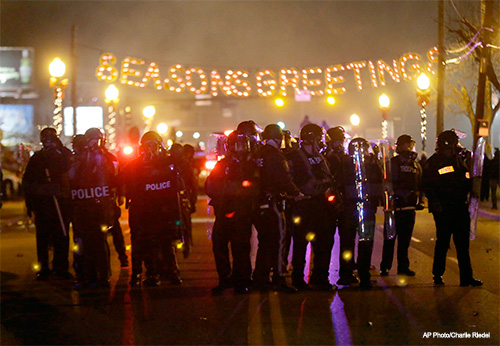 A strange sight, for sure. Ferguson, Missouri in flames. With Christmas lights all around. A "Season's Greetings" banner, shrouded in tear gas.

The fires in Ferguson have again surfaced some deep wounds - and feelings - in our country. Fear. Anger. Distrust. A bitter legacy of an ugly past.

But beyond the dueling voices in the Ferguson tragedy, we look for some hope of desperately-needed healing. And maybe that's where Ferguson fires and Christmas lights actually come together.

I've seen that hope of healing - in one of the most unlikely places imaginable. South Africa.

A country where racial separation and injustice was the brutally enforced law of the land. The malignant system called apartheid allowed 10% of the population - white South Africans - to oppress the 90% of the population, who were people of color.

The 90% had no vote. They were forced to carry I.D. cards that identified them by their race and consigned them to total separation from the lives and rights of white people.

South Africa became part of my heart during my four trips to speak to young people there. The Christian organization I worked with owned their own conference center. Where they dared to bring black and white young people together. At a time when that was unthinkable.

So I watched as young people who had never been allowed to know someone of another color ate together, roomed together, played together and worshiped together.

I'll never forget the opening remarks of the African-American brother I'd asked to share the speaking duties with me. He told the audience, "I cannot tell you what a dream come true it is for me to be in South Africa. Growing up in a black church, we have prayed for you here every Sunday since I was a boy."

It was an amazing week. Like a number of others I would be at over the years. Amazing because I saw what hope looked like amid the bitterest racial divide in the world at that time.

During the last night's sharing time, I heard black young people forgiving white people for unspeakable hurt. I heard white young people forgiving the black person who had murdered someone they loved. And asking forgiveness for the wrongs they had done against people of color. I saw walls come crashing down. And bridges being built.

Because of Jesus. The baby whose birth those Christmas lights celebrate.

Those broken, but healing, South African young people each said it was Jesus who had changed their hearts. Actually, God's told us He would. "I will give you a new heart, and I will put a new spirit in you. I will take out your stony, stubborn heart and give you a tender, responsive heart" (Ezekiel 36:25 - The Bible).

What does Jesus do that changes a hard, unforgiving, uncaring heart?

He shows me people through His eyes. All people. Created in His image. "His workmanship," the Bible says. Worth Jesus dying for.

And Jesus shows me the darkness in my own heart - where prejudice and selfishness and anger and pride live in its dark corners. "Sin," He calls it. I can't spend much time thinking about the sins of others. I've got my hands full with the monsters inside me.

And - as I saw so vividly in South Africa - Jesus offers the power to love someone when they give you no reason to. Like He loves me.

The Christmas angels announced, "To you a Savior is born." He's a Savior who - when He's enthroned in a human heart - changes that heart. Causing me to see each person through His eyes - infinitely valuable. Causing me to face my own inner darkness, the generator for so much that's wrong. And enabling me to offer love to someone who is really hard to love.

Jesus came on Christmas because we're all broken people. He allowed Himself to be broken. So we could be healed. I know. I'm one of them.