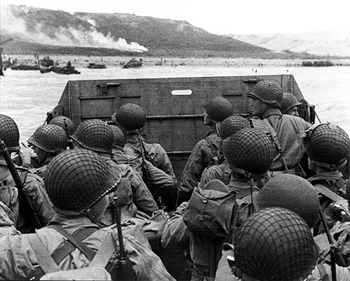 Most Americans weren’t around on that D-Day 70 years ago this weekend.

But we’d better be glad they succeeded when they hit those Normandy beaches. They stopped perhaps the most powerful threat to freedom in history. Hitler’s Nazi Germany.

A few years ago Steven Spielberg used his cinematic genius to help this generation get a taste of what that victory cost. “Saving Private Ryan” had to carry a strong “R” rating – because of the brutal D-Day violence it portrayed.

Hollywood has no rating for how awful it really was.

The heroism of the Allied troops who waded ashore that day defies words. They knew what they were headed for. A beach laced with deadly landmines. Nazi sharpshooters and artillery on the sheer cliffs above, positioned to mow down the invaders.

But still they charged into the face of the enemy. For a cause greater than themselves. They were some of the greatest of the Greatest Generation.

In the words of President Reagan on an earlier D-Day anniversary, “We are all the children of their sacrifice.”

But now, 70 years later, I’ve been profoundly challenged in my personal faith by their sacrifice. In the words of a correspondent who watched those warriors charge the beach:

“Courage is not the absence of fear. It is the disregard of it.”

That hits me personally. Because there have been too many times when fear has stopped me from doing the right thing. Even the life-saving thing.

It's the central mission of my faith. The one that caused Jesus to charge onto our “beach” to set us free. Knowing He would die brutally for that Cause. Jesus, we are all the children of Your sacrifice.

His mission, He said, was to “seek and save what was lost” (Luke 19:10). Lost because we’d defied the God who made us and became our own god. Running the life He’s supposed to run. In the Bible’s words, “Each of us has turned to his own way” (Isaiah 53:6).

Leaving us with an awful eternal death sentence. Which Jesus shed His holy blood to pay so we wouldn’t have to.

I know that. But the people around me have no idea that what Jesus did on that cross was for them. It’s life-or-death information they must hear.

Then why do I not tell them? Why do so many of my fellow Jesus-followers choke on that life-saving Good News?

Of what they’ll think of me. Of them rejecting me. Of me messing it up.

All the fears have one thing in common. They’re all about me. What will happen to me if I “go in for the rescue.”

Back to D-Day. “Courage is not the absence of fear. It is the disregard of it.” Sure, you’re afraid. But you refuse to let your fear decide what you will do. Because of what’s at stake.

Someone’s forever. That’s what I should be afraid of. What will happen to them if I don’t risk to rescue them. If I let my fear decide. God underscores how urgent our mission is when He tells us to “snatch others from the fire and save them” (Jude 23).

But even the heroic Apostle Paul said, “I came to you in weakness and fear and with much trembling.” But he didn’t let his fear decide. He still told them about “Jesus Christ and Him crucified.” Because spiritual rescue wasn’t about him. It was “a demonstration of the Spirit’s power” (1 Corinthians 2:2-4).

I don’t go in alone. The Hero of eternity’s D-Day goes with me.