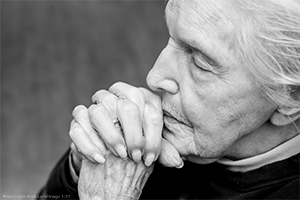 Ten more minutes and my wife would have never been born. The story that changed everything is hope for any of us who love someone who's making some very bad choices.

My wife's grandfather, Bill Hadley, had given up on life. Trashing a profitable career for the alcohol and cocaine he couldn't resist...labeled with a prison record and penniless - he was hopeless and suicidal.

And that night, as he walked South State Street in downtown Chicago, he was minutes away from Lake Michigan where he'd decided to end it all.

One thing saved him. A mother who had never given up on him.

There, on the street, he heard the song - the one his mother used to sing to him. It was coming from the rescue mission he just passed. Something made him stop inside. Where a caring mission worker shared a Bible verse that has probably changed more lives than any other -

"For God so loved the world that He gave..."

Suddenly, Bill finished it. "...His only begotten Son, that whosoever believes in Him will not perish but have everlasting life." (John 3:16). Somewhere in the long-clouded corners of his memory, he could hear his mother teaching him those words.

And that night - minutes away from ending his life - he found life. The kind that verse talked about. "Everlasting" life. He would later say, "I walked out of that mission - not a reformed man - but a transformed man!" He never touched or wanted alcohol or drugs from that night on. And he spent the rest of his life bringing the hope he'd found to forgotten people across the country.

And now three generations Bill never met are here - living and spreading that hope - because of one man's choice that night.

The story behind the story is told in the inscription on the back of a photo of young Bill. His mother wrote - "O Will, every night when I read my Bible, I look at this picture and I ask God to keep you and somehow seal your heart with His love. You may see this after I'm gone and you'll know that I never ceased to pray for you. Mother." She did live ten years after the night God answered those prayers.

Even as her son's life got darker and darker, this mother was hanging onto a powerful but easily forgotten truth. That I, too, have hung onto - even today. Because so much of my life's work has been trying to love and rescue people who just keep spiraling downward. It's a hope-preserver for all of us who grieve and pray for broken, prodigal people.

Never forget the difference between a chapter and a book.

Many a book with a happy ending has some very dark chapters. A loved one's seemingly unstoppable rush to the edge of the cliff is not the book. It's a chapter.

If we lose that wide angle lens perspective, we'll lose hope. But the Bible urges us to "not become weary in doing good, for at the proper time we will reap a harvest..." Then, the punch line: "if we do not give up" (Galatians 6:9). And Jesus said that we "should always pray and not give up" (Luke 18:1).

That's what Bill's mother did. She wept over many chapters. But she never lost sight of the ending God could write to the book of her son's life. She just kept loving, praying and believing. And the final chapters of Bill's life were more glorious, more miraculous than she could have ever dreamed.

If we can remember, in the darkest hours of a loved one's heartbreaking journey, that this is a chapter - then hope can win when despair is strong.

Even as I write this, there are young men and women whose life-eroding choices I grieve for. But I know there is a relentless Shepherd who came to "seek and save those who are lost" (Luke 19:10). Who says, "I will search for the lost and bring back the strays" (Ezekiel 34:16). He will do whatever it takes to bring them home. Even when it meant a cross.

So, as long as there's breath, there's hope.