You could feel the electricity in the room!

Hundreds of Native American young people from scores of tribes, raising the roof with songs of praise to Jesus!

Back home, Jesus is to many "the white man's God." Not in this gathering. Here, Jesus is Lord!

We stood there watching your prayers being powerfully answered. At a counseling room door, we met some of the Native young men and women who were there because friends like you made it possible. This was their night to "come to the Cross" to begin a relationship with Jesus.

For me, WLS is encapsulated in some indelible scenes of God at work. 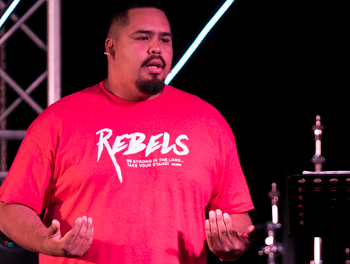 Our WLS theme - "Rebels." Why? Because in our world today - in the world of these young people - passive, business as usual faith won't stand a chance. To stand against what's wrong, to stand for what Jesus stands for - well, that requires the passion and courage of a rebel for the right! Speakers for the week - mostly young Native leaders - preached identity anchored in Christ, deep repentance from sin, the culture-defying sexual purity of the Word of God, a lifetime of radical love, making every choice by God's Word.

My son Doug Hutchcraft wrote a powerful song about it that drives that message home - and into your heart. I will never forget the "fire up front" as, night after night, a crowd of young Native warriors surged to the foot of the stage, thrusting an arm in the air as they sang at the top of their lungs - 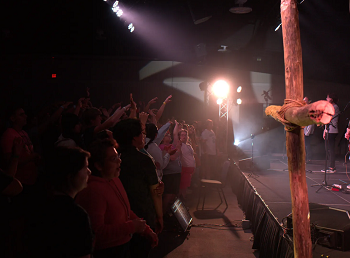 I'm convinced the WLS warriors returned home with that deep in their hearts as the anthem of a new day.

Coming to the Cross

Three times the Gospel invitation was given. Three times Savior-seeking young people streamed to the counseling room where an On Eagles' Wings team member confirmed their commitment to Christ. Each time, I had the privilege of being the first person to hear their newborn testimony. 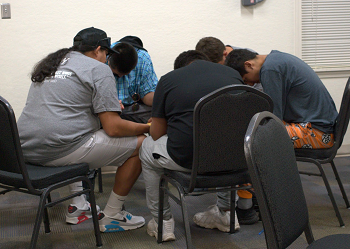 Like Gabriel. His Arizona gang affiliation evident from his tattoos. Grieving the friends he's lost to the gang life. This night he says, "I want to follow Jesus now."

Emily from South Dakota was glowing as she told me how she had given herself to Jesus that night. In two weeks she would leave for elite training in the space program. I asked what her goal was. She didn't talk about the space program. She lit up as she said, "I want to tell everyone everywhere about Jesus!"

Marisa from New Mexico spoke quietly as she told me why she had come to the Cross. "With my baby coming, I have to be done with my addictions. I need Jesus." She belongs to Him now.

I'll remember faces like that. So free. So forgiven. Suddenly new. 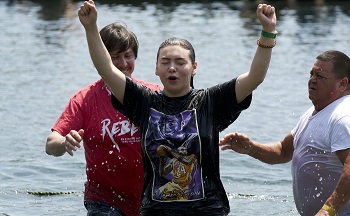 Lined Up at the Lake

Reborn that week. Now waiting to follow their Savior in baptism. They radiated joy as I explained to the gathered crowd - "Going down into the water - goodbye, old me. Coming up from the water - hello, new me!" Then arms thrust upward toward heaven as they emerged to welcoming applause. 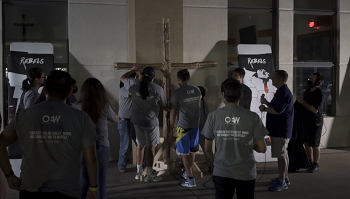 As the Warrior Worship Band sang "Light Up the Night," the lights in everyone's hands literally were the only lights in a pitch black room. Nick (Jicarilla Apache), our On Eagles' Wings Coordinator, pointed to the old rugged cross up front and declared, "The Cross is our only hope ... and you are the light!" Several warriors lifted the cross above their heads and began to carry it through the crowd and "out to a world that desperately needs to hear about His love." Behind them - all those young people spreading their light through the darkness of the room as they followed the Cross!

It was the end of this Warrior Leadership Summit. It was the beginning of the miracles back home!

... the 2022 On Eagles' Wings team carries the Message of the Cross to six challenging reservations where that Message is desperately needed!

Early indications - this could be one of the strongest teams ever! First sign - that final night at WLS when the team was introduced for the first time. When that "last call" invitation was given and young people streamed toward the counseling room, the OEW veterans followed them there to lead them to Christ. But something happened that we'd never seen before. On their own initiative, they brought one of the just-announced new OEW team members to watch how to lead someone to Christ!

We've now trained the warriors in sharing the Gospel ... in knowing and sharing their powerful Hope Stores. A long journey to the region God has led us to - and soon the reservation rescuing begins.

Please ... join us in our urgent prayer - "Lord, please keep them alive until we get there!" 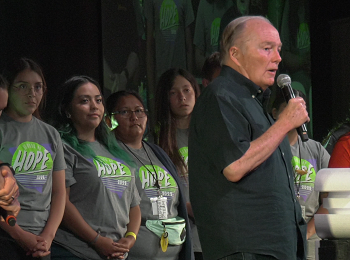 P.S. It's hard to put into words how much your prayer means this summer. Without going into detail, all of our leaders have felt relentless attacks from the enemy, every step of the way. He's made it hard, but he is losing - including all those precious lives rescued at Warrior Leadership Summit. It will be your prayer that continues to win this battle! We leave for the reservations with a substantial amount of money for this summer still needed. If God lays it on your heart to be part of that miracle, it will encourage our entire team.

We'll focus on the battle for young Native lives. Will you please help provide the ammunition? Your gift today will help send a Native team member to make a difference, and share Jesus on several reservations still this summer. Your gift is very much needed right now. Thank you so much!

We carry His Cross. We are His light. "The light shines in the darkness, and the darkness can never extinguish it!" (John 1:5). Stand by for "the rest of the story."