A Fight for Every Life

"They're really hard there."

That's what I kept hearing about the Cloud Lake Reservation. That's probably more of a reason to go there.

Watch this encouraging video of this year's Summer of Hope!

Even though our venue was surrounded by Indian housing which the team had canvassed earlier - and where our sound system can't be ignored - we started the night with just us. Finally, one girl hesitantly checked it out. Missy (Lakota), whose self-harm scars are now evidence of her new Hope, quickly went to welcome her. Neither girl realized the destiny in that meeting. 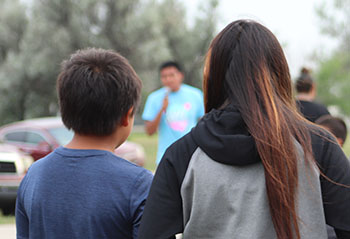 It was hard, but these are the warriors that don't give up. They got an OEW sign and went to the street to stop cars going by. They saw curious locals watching from afar, almost out of sight - and went to meet them. Some guys arrived late to play ball - when they tried to leave, our guys stuck to them like Velcro. A couple warriors rode around the neighborhood in a pickup truck, looking for locals to invite. They were simply relentless in finding local young people. Reminiscent of a Shepherd I know who doesn't just wait for us to come to Him.

It was a fight for every life, but the crowd grew each night. Landon (Navajo) was all over the area, spotting newcomers, making friends. Often with a cup of water in his hand - a simple Christlike kindness on a hot night that established immediate connection. Some of those cups were for the grandfather who set up his lawn chair on the perimeter. Before we were done, Landon had led that longtime believer in his people's centuries-old beliefs to saving faith in Jesus Christ. 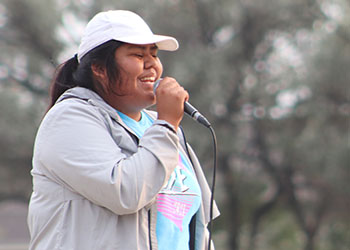 Becky's (Sioux) Hope Story silenced everyone - a story of "more funerals than weddings" and virtual abandonment by a drinking mom. And "stuffed feelings" that led to self-harm, the brink of suicide and a hospital. But in her words, "I was facing everything alone, now I'm facing everything with God in my heart." Because, at Warrior Leadership Summit, "July 4, 2018, I became a child of God."

Becky went straight from telling her story to go to the far edges to greet a young lady and her grandmother. Immediately, Grandma pointed to her granddaughter and said, "That's her story." Here was one of those God-sightings we call a divine matchup. Far from her own rez, Becky was, in essence, meeting herself - without Christ. The girl told Becky, "Everything you said was my story. Except you're happy - and I'm not."

She's happy now. Because that night she found the One who's the Hope in Becky's Hope Story. 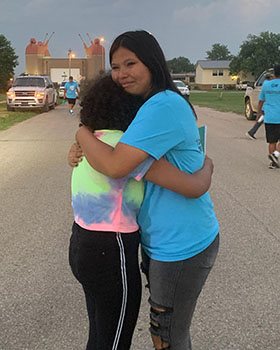 And then there was Tricia, that first girl to show up that first night. Missy had stayed with her every minute, trying to open up that very closed life. A girl who identified herself online as "I am trash." Her aloneness and self-harm and self-destructive thoughts mirrored Missy's life before Jesus. Another "random" connection, miles from home, orchestrated by the Savior who does "divine matchups." Missy's "won't give up" praying and sharing led this broken girl to the Jesus who had rescued her. That girl's comment on her response card: "I gave my life to Jesus" - to Whom she is not "trash," but a treasure worth dying for.

I will not soon forget the scene as Missy was the last one to board the bus our final night at Cloud Lake. Tricia was hugging her rescuer and wouldn't let go. Life had come to her through a divinely directed meeting with a girl with scars - and a Savior who forever bears the scars of the price He paid to rescue us.

That night, more than a third of those Cloud Lake young people - who the warriors had to seek to save - left there with Jesus in their hearts! 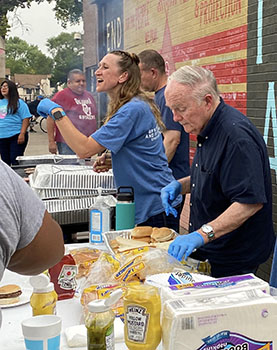 The contrast was startling. The scene: the heart of one of the most racially troubled cities in America. In a public housing parking lot, amid a community populated by people from 38 Native tribes. And there was Brad, grilling hamburgers, with his family and me assisting (Photo on right)

Yes, we usually "hide out" on the bus or in an OEW vehicle. No room for that this night. But our non-Native faces were "legit" because we were serving people who were obviously very hungry.

But the real contrast was the heartbreaking graffiti, carefully drawn on the wall behind our grill. The words reflected both the danger and the tragedy that is the daily backdrop for the young people living in the Parkwood community...

All around those wrenching words - the names of young men from the community murdered... and young women, trafficked and/or killed. Daily reminders that death always seems close in Parkwood.

Our hosts were a courageous Native couple, On Eagles' Wings veterans, who serve that community. His orientation of the warriors included the several recent homicide deaths in that area. This "urban rez" is literally a battlefield.

With precautions in place, the young warriors of On Eagles' Wings came with their message of hope to a place so very different from the reservations they come from and minister on. Not only is the urban environment hard - so are many young hearts that have steeled themselves to survive. 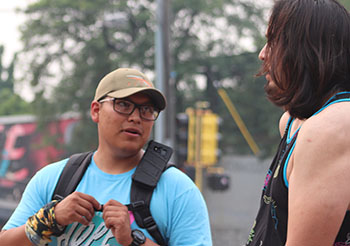 But basketball is the language spoken by both the residents and the visitors. So our events under the hoops have built a bridge.

And in spite of being far outside their comfort zones, the blue-shirted warriors once again rose to the occasion. Within minutes of their arrival, there they were, matched up around the parking lot with local young people. Attempting to break down the high walls the locals had built around their heart.

Some local young people walked away. Many hid out in an inseparable fortress of friends. But in a place where it's all about surviving, some began to open up to these Native peers who were so transparent and who obviously cared.

What was amazing was the silence and respect most showed when a warrior took the microphone to share their story. Parkwood may be a different environment, but wounded hearts are wounded hearts. And for a crowd who just came for basketball, the attention told how the Hope Stories were reaching hearts. 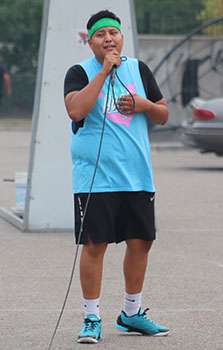 In a concluding wrapup, Dillon (Navajo), told about his hatred toward the father who drank heavily, who beat Dillon's mom and who "broke our family." But Dillon said he "looked in the mirror one day and saw my father." That realization brought him to thinking, "Why should I keep on living? Am I just going to end up another Native statistic?" Something that resonated with many around those hoops.

Then Dillon took them to the Cross where everything changed. Where his every sin was paid for. Where he was forgiven. Where he was able to forgive his father. And where now the father who did so much damage is finding his own new beginning.

Moments later, as Dillon led in a prayer of surrender to Jesus, some even took the bold step of making a public commitment to Jesus at center court. Before the night was over, about every fifth person there indicated they had begun a relationship with Jesus. Once again the young warriors were living the answers to your prayers in another broken place where you helped send them.

It was uncharacteristically peaceful in and around that place those two nights. It was "the peace of Christ" that has covered every place the team has been this summer.

Even here in Parkwood. Where there's been so much dying. This night, life had won.

Next week I'll be back to you with an important closing perspective on this summer... "29 Summers of Hope - This One Was Different." Will you please help make this Summer of Hope to Native America possible?