"Can anything good come out of Nazareth?" they asked about Jesus.

"Can anything good come out of Bluffton?" those who live on or near the Antelope Valley Reservation have been asking for years.

Tribal people call Bluffton "the most dangerous place" on their reservation. Locals in the area say "it's a place I never go." 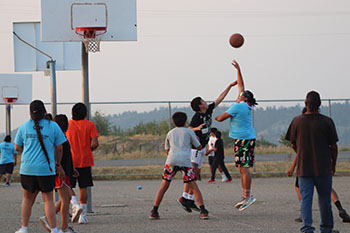 It is where the On Eagles' Wings warriors of 2021 went just days ago. To the place known as a "meth market" and for meth-wrecked lives. As a dangerous place for women, with human trafficking and violence - sexual and otherwise.

But the places others "never go" are the places On Eagles' Wings needs to go. Bluffton is one of the broken places your praying and your giving have sent these intrepid warriors this summer.

Though the outreach started relatively small, the warriors still deployed into the personal connections with locals that are the first step in spiritual breakthroughs. Hope Stories like Crystal's (Pawnee) captured attention across the court: "Partying, drinking, smoking...I was taken advantage of at a party by a guy I thought I could trust...but Jesus brought me out of the darkness and into His arms...I felt an overwhelming heaviness of love and just started crying. I was reminded by God that serving Him is what I'm created to be and this is what I was meant to do. Sharing Jesus with you!"

Then invitation night - largest crowd! The call to come to center court to confess Christ - and that short, but oh so long, pause. 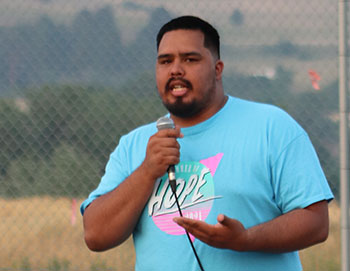 Then they started coming - from every corner of the sprawling court. From outside the perimeter fence. A surge of Bluffton young people, in a response led by some of the influential big guys who had come to play ball.

There was "joy in the camp" that night when we realized that 1 out of 3 people there had come to Christ! We were with those who invited us - who are poised to follow up with their first event only days from now - celebrating the victories they had prayed for so fervently.

In this place where there has been so much darkness, a Light has dawned. Brought by the young warriors in blue who refuse to forget what it feels like to be "lost" and are determined not to leave anyone there.

That's what our veterans remember about the Mountain Lake Reservation three years ago. Children so lost, so young.

The OEW Team members are from places where there's a lot of brokenness. But they kept coming for prayer with hearts broken for the lostness of the Mountain Lake children. So hungry. So poisoned by what they've seen and experienced sexually, violently, with alcohol and drugs. So abandoned to raise themselves. So out of control. Like the children trying to sneak alcohol into our Gatorade our first night.

It's a tragic measure of that hurt all grown up when you realize this reservation has had, on average, a suicide a month!

But hope was in the air in the park that night as local young people streamed in for the OEW event. They remembered that feeling in the air called "hope" from the team's last visit. And they came in numbers that almost overwhelmed the warriors! 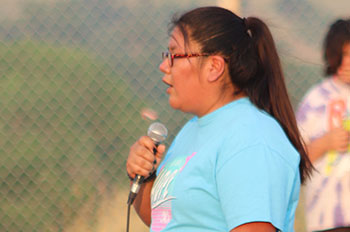 Amazingly, in spite of the large and spread-out crowd, the warriors' Hope Stories were met with amazing silence. Like Jessica (Apache), largely abandoned by both a mom and dad who were drug dealers - eventually leading to her mother going to prison. Left with a family member who sexually abused her repeatedly. Bullied at school, "I became the bully." The dealers' daughter who found it easy to get into drugs. Ultimately, feeling pretty much alone in the world, Jessica's suicide attempts began.

This life, sadly reminiscent of so many on the Mountain Lake reservation, went on to be forever changed the day, as she says, "I gave my life to Christ." The self-harm stopped and "I am no longer alone."

All over the park, in individual conversations and little clusters, the warriors shared their story and His story. When Brian (Creek) extended the invitation to come to center court to declare you were beginning with Jesus that night, they came. From near the court, from the far corners, from vehicles - a salvation stream coming from every direction! A public explosion of hope in this place where hope has been so hard to find.

Carrie (Navajo) had come to our vehicle near the end of the night, heartbroken over a local girl named Heather. Abused by her uncle. Beaten by her drug-addicted mother. Almost lost to two suicide attempts. But about to leave without Jesus, in spite of Carrie's poured-out heart in trying to reach her. We prayed with Carrie. She went back one last time determined to "hold nothing back." 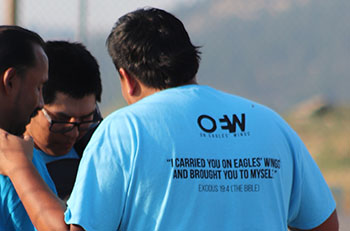 Carrie returned to our vehicle, this time with the glow of heaven on her face! And the news that, in our final minutes, Heather had opened her heart to the Savior she needed so desperately! One eternity victory among many won that unforgettable night.

The broken town of Bluffton. The broken children of Mountain Lake. Visited by the Savior who was broken so they could be healed. Through those blue-shirted warriors who came in His Name. Rescued by Him. Prayed for and sent by you. You can still help send an On Eagles' Wings team member! Will you please help make this Summer of Hope to Native America possible?