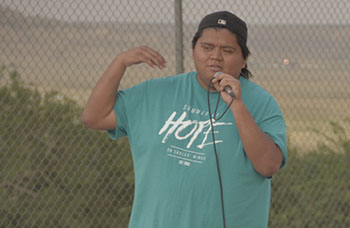 They were big and tough - and scared. Local Native believers said they were scared...of some of their centuries-old beliefs.

There's a lot of fear of dark forces that makes it very difficult for Rocky Creek young people to choose Jesus. Even the big guys.

But these guys listened to Darren, a big guy himself - and his story of being disowned by his family for choosing Jesus. And of a family transformed because of one son who brought Jesus into their lives. His challenge to those guys, as he has mentioned many other places: "It's time to come home to Jesus." 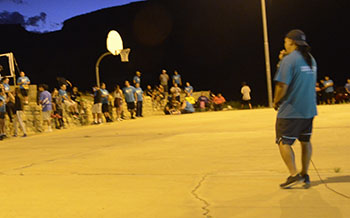 The team's time at Rocky Creek was, as expected, a battle. Right around the time of the team's events, some of the local very significant centuries-old events had been going on. Meanwhile, Jesus was on a basketball court, through His young warriors.

Darcy's Hope Story of growing up in this tribe was especially compelling. She talked of how no drug, no alcohol, no guys, and no ceremonies had been able to heal the wounds of abuse and depression. For her to boldly declare the life-changing power of Jesus, His cross and resurrection, on a basketball court in the middle of her reservation was beyond courageous.

One of the holy moments of this summer was when Marissa shared her story. She told of coming to that same court five years earlier, filled with pain and despair from all the abuse and the times when she was told at home, "You're worthless." Finally, all the hurt led her to conclude that she might as well just end her "worthless" life. 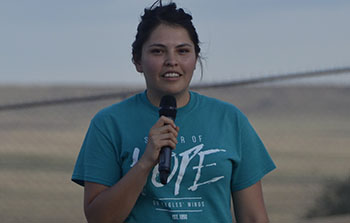 But that night an OEW warrior with a story that mirrored hers told of how her life had been transformed when she discovered that God's Son had loved her enough to die for her. "I was sitting right there," Marissa said, as she urged the Rocky Creek listeners to experience that love for themselves.

It just so happened that Marissa's younger sister had come to hear her that night - and was seated right where Marissa sat when Jesus changed her life. One of our warriors had been talking with her, not knowing who she was. Her story sounded just like Marissa's - including two suicide attempts. But that night she not only sat where her reborn sister had sat - she also opened her heart to the same Savior who had rescued her sister!

She was one of the Rocky Creek young people who walked to center court that night, choosing Jesus where everyone could see! Others had prayed to begin that relationship in conversations with the OEW warriors. 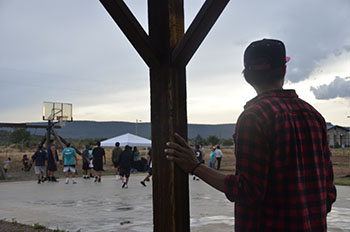 Every Rocky Creek young person who opens up to Jesus is nothing short of a miracle. We saw three nights of those miracles!

From those battles, the combat-weary warriors of On Eagles' Wings made the journey to their last battlefield in this hard-fought Summer of Hope. The Black Rock reservation would be one of their most challenging.

In recent years, Black Rock was reported to have had a suicide rate 13 times the national average! In part, the poverty of 85% unemployment explains the despair. But so does the deluge of drugs that has inundated their middle school students. One of our local hosts said that, in just the past few months, two nieces had chosen suicide - one of them only 11 years old.

By our second outreach night - like so many nights this summer - there were looming thunderstorms. We prayed. And again, a storm that threatened an outreach suddenly split and went around where we were! It happened time after time this summer. Again, your prayers being answered! 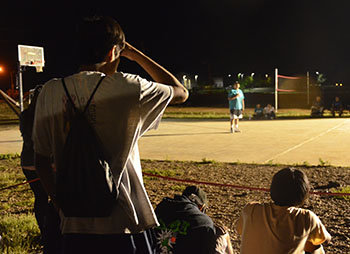 It was amazing who was there. Two of the reservations main drug dealers - who heard the Gospel powerfully presented that night, both from center court and from one of our warriors. There were also gang members from opposing gangs.

That night, one-third of the people at the event indicated they began a personal relationship with Jesus! The following night, one of the gang members went forward at invitation time, while three others prayed with Mike (Cherokee) who had just kept fighting for those guys.

The night before, Mike had led another Black Rock young man to Jesus after Mike shared the hope Jesus had given him after multiple suicide attempts. The young man prayed as he reached out to Jesus - "...and, Lord, please forgive me for trying to kill myself two nights ago." 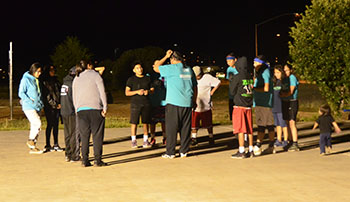 So many times I have asked friends like you to join us in this prayer: "Lord, please keep them alive until we get there." That young man was a direct answer to that prayer - along with others this summer who had tried to die but had been kept alive so they could choose life in Christ!

Most dramatically, I thought about Marissa from our team whose Hope Story has affected so many this summer. Reached at a Rocky Creek event five years ago, just before she was ready to end her life. And whose sister was led to Christ this summer on the same basketball court - after two failed suicide attempts.

That's such a powerful reminder of the decisive role your prayers have played in this amazing summer. Splitting storms, changing hard hearts, empowering battle-weary warriors, binding the enemy and drawing hundreds of Native young people to the Cross.

From the bottom of my heart - and on behalf of the weary but victorious warriors of On Eagles' Wings - thank you!

This Amazing Summer of Hope 2019 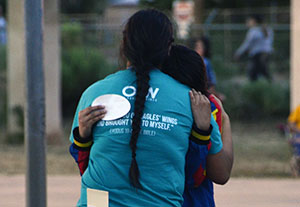 Traveled nearly 4,000 miles to some of this country's most hope-starved reservations.

And, with God working through them, at least...

On each reservation, our local hosts are actively planning follow-up events to help this powerful moment become an ongoing movement in their community. And many of the On Eagles' Wings warriors, sensing Christ's call to serve Him, will be in Bible schools this fall.