When the President sent Federal law enforcement assistance to four of the highest crime reservations, Arrowhead was one of them. 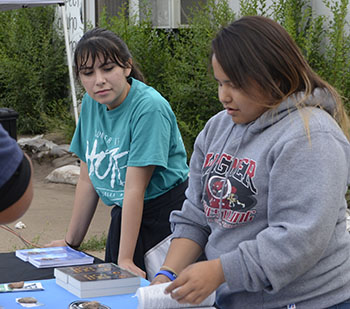 When a Senate committee was investigating the "suicide epidemic" on reservations, they asked Arrowhead young people to testify. Because there had been so many there.

And this was God's choice to be the fourth community for Hope to be brought to this summer!

For me, there was a strong personal pull to this reservation. At a camp many years ago, teenagers from Arrowhead were the first Native American teenagers I had ever met, God planted a seed in my heart - that 20 years later would germinate at Antelope Valley into a broken heart and the On Eagles' Wings movement. 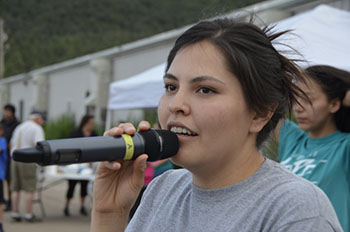 As always, God used the warriors' Hope Stories to open hearts. Casey (Cherokee) spoke directly to the suicidal feelings of many young people here. At an early age, he learned to believe he was worthless. Abused by his mother's boyfriend, then blamed for it by his mother. Then the trauma of finding his dad dead on the living room floor. The hurt became so great he saw suicide as the only way out. Seven attempts.

But when he surrendered it all to Jesus, "He made me a true Native man, free from addictions and pain. He literally transformed me. From a guy who was shy and depressed to a guy filled with a love and a hope that's almost unexplainable."

The next day we were told that the Hope Stories had created a buzz all over the rez. That the Arrowhead young people "want to hear more. They've never heard Native youth speak like this before!"

The impact was undeniable the final night. The largest turnout of any rez so far. And the largest response to the Gospel yet in this Summer of Hope! The local youth leaders were blown away by the surge of their young people coming to center court. They are poised to capture the momentum of this breakthrough.

Your prayer reached across the country and into the hearts of the Arrowhead people. And helped them trade their despair and desperation for the life-giving Hope found in our Jesus.

The warriors would need these victories as their next reservation would bring some of the fiercest spiritual warfare of this summer. We knew Spirit Mountain would be one of the most challenging yet. 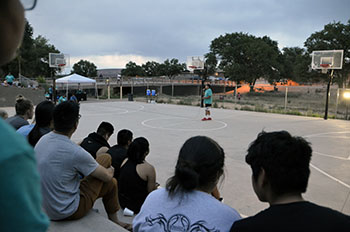 Local Native friends there speak of the extreme hold centuries-old beliefs have on the people there. From their earliest years, the Spirit Mountain people are taught that their religion is not just beliefs and ceremonies. It is who they are. And Jesus is not an option.

But it was at this place where hearts are so hard to Jesus that God brought together our strongest turnouts yet! And it was clear from Night One that God had really gone ahead of His team. You could, for example, have heard a pin drop during every Hope Story.

But it was clear they were also facing intense spiritual warfare. People who hold strongly to the centuries-old beliefs came to vent their anger over what was going on. Some called the tribal police who came and watched - and left satisfied that this was okay. One woman insisted that "we don't like what's going on here." On our second night, one man threatened to file a formal complaint to the tribal council, insisting that action be taken against these events.

Each night there had been thunderstorms in the forecast - which we fervently prayed God would keep away until our rescue mission was complete. We watched as storms threatened all around - except around our event.

Local Native friends shared with us that the week before there had been ceremonies, invoking the spirits to bring rain. Spirit Mountain folks who cling strongly to the centuries-old beliefs now said, "It's because of what you're doing that the rain isn't coming here!"

As we headed into our decisive final night, we knew the spiritual warfare was intensifying. It was one of those times when the prayers of this team passionately claimed the victory won at the Cross. And when we prayed God would lead you to intensify your prayer.

The warriors will not soon forget the miracles of that third night. Despite the forecast, no storm came to that court. Despite the fierce opposition, nothing materialized to limit the proclamation of His Hope - even an angry woman's overt attempt to unplug or push over our speakers. God was fulfilling the promise the team had claimed: that "no weapon forged against you will prevail" (Isaiah 54:17).

Perhaps the greatest miracle of all came as the public invitation was extended. Every Spirit Mountain person knows there will be a price if they choose Jesus. And yet, almost immediately, two guys started to walk to the center of the basketball court. Then others came from every direction. And amazingly, they all turned and faced the crowd! It was bold. It was real. It was a miracle. 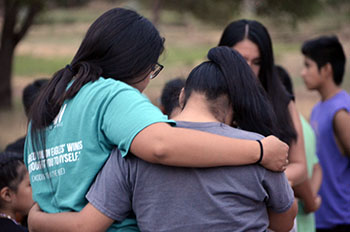 In this fiercely defended stronghold, God gave the second greatest harvest of this amazing summer! All glory to our "mighty to save" God!

It's been a week of rapid acceleration on two fronts - the intensifying battle and the increasing impact. On both those fronts, your prayer is both desperately needed and clearly decisive. So, please - don't stop now! Your prayer reaches up to God's Throne Room…across the country to this mighty little army of reservation rescuers...and right into the hearts of the people the warriors are fighting to bring hope to every night. Thank you!