"The most depressing, most dangerous place to live."

That's how a national magazine described High Creek, our first reservation in this Summer of Hope. 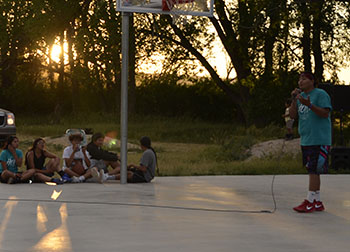 For most of us, a community with 80% unemployment, with two-thirds of the people living beneath the poverty level, is unimaginable. For the embattled Native Americans of High Creek, it has been a breeding ground for heartless meth gangs and unspeakable violence. The kind the local emergency room sees day-after-day. Violence one nurse described as "unbelievably brutal." It's a place where too many are dying too young. Where girls disappear into trafficking all too often.

Few reservations in this country have broken our hearts more than High Creek. It's a place where your prayer was not only needed. It was decisive!

Our first night was tough with a good - but restless and hard to engage - crowd. But our Hope Stories and Gospel wrap-up were strong - establishing clearly that the people in the green t-shirts have brought hope with them. Hope whose name is Jesus. The battles led us to lots of fervent prayer the next day. We suspect you were praying, too! The results would be game-changing.

What's so encouraging here is a couple who have a growing youth ministry! Great follow-up partners. They launched their ministry here from bringing some of their young people to Warrior Leadership Summit last year! We so wanted a victory at High Creek, not only for this rez's victimized and broken young people, but for these embattled but dedicated leaders. 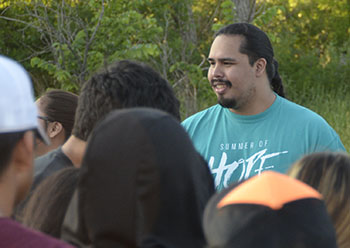 Praise God, on Night Two, God brought a large increase in attendance. And attention. It was peaceful...they stayed...they really listened.

Especially when Marissa (Navajo) shared her deeply moving Hope Story. Marissa was abused and constantly told that "I was worthless, that I had no reason to be alive." Ultimately, she began to believe it. Drugs provided temporary relief from the pain inside. Cutting did not bleed out that pain. She was thinking suicide because "I thought it was the only way for me to be free."

That's when she was invited to an OEW "event like this" on her rez. She heard a young woman tell of a lifetime of worth-crushing treatment, culminating in a near suicide. And the hope she found in a tribal man named Jesus. That night Marissa opened her broken life to Jesus. "I felt loved. I felt whole. I felt new. He picked up my broken pieces and made me into a new creation."

After another round of our 3-on-3 tournament, Travis (Muscogee Creek) gave a powerful presentation of Jesus, "the God who came down from the mountain to save us." They were really listening. He led in a prayer to begin a relationship with Jesus. The response cards indicated over a fourth of the High Creek young people there indicated they had put their trust in Christ!

Man, did we pray for that final night! A Jesus-breakthrough in this place could be an unforgettable, undeniable proof that Jesus is on the move at High Creek.

God was all over the court that third night as Curt (Nez Perce) told his heartbreaking story of addiction, bloodshed and abuse in his home - and his conclusion that "I am done living life, because I'm worthless." And his discovery at Warrior Leadership Summit one year of how Jesus loves and values him - just before he had planned to end his own life.

Then, the call to come to center court to declare they had prayed to begin a relationship with Jesus. Immediately, some of the guys who had come for basketball made the first move. In a matter of moments, there were far more at center court than around the court. It was a not-to-be-forgotten miracle in the heart of all this brokenness!

It was a wonderful victory to fuel this team for the battles ahead. And one that was wind beneath the wings of the dear couple who have fought so hard for a moment like this. One tribal man on their team said, "We just don't see things like this here." But there's something about these young Native messengers, delivering Christ's liberating message through their own stories, that God uses to break through as nothing else has.

I wish you could have seen the joy on warrior faces that was evident at our debriefing. Especially for those first-year warriors who had just had the incomparable thrill of leading their first person to Christ!

The youth workers at High Creek are ready to launch an aggressive follow-up program on the same court, just a week from now. That means "fruit that remains."

Life has won where there's been so much dying. In answer to prayers like yours. Through brave young warriors you helped send.

And in a place where there have been so many tragic headlines, today there's a new headline.

"Hope has come to High Creek. Jesus has come!"