She's a nurse at the Cedar Canyon Reservation Health Service. She told me the E.R. had been one tragic emergency after another. "Drug overdoses, stabbings, shootings, suicide. We've had elevensuicides since January. It's nonstop."

Another reservation in crisis. This year God seems to have led On Eagles' Wings to one place after another where a Summer of Hope may be the only hope for many. 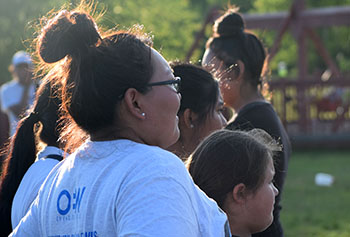 Every time a challenge has arisen, God's warriors have risen to meet it. They have battled when there were many, when there were few, when the rain wouldn't stop, when they were rebuffed, when a major interruption nearly shut down the invitation. They have fought for lives in the cold, in the heat, in swarms of mosquitoes; in a violent urban community, in remote island reserves.

Now here on this rez where there's been so much dying - young dying - God brought the largest crowd of the summer so far. Our team was all over the place, making connections, looking for opportunities to share their Hope Story. It was especially challenging because a third of our team was now bringing Jesus to two other reservations.

By the end of the night, one-third of the people there indicated a personal commitment to Jesus! Katie (Tuscarora/Seneca) led a girl to Jesus who has paid the high price for her mother's life of drug dealing. Angie (Navajo), a first-year warrior who has led a girl to Jesus on almost every reservation so far, was led to a girl who lost both her parents tragically and who has been shuffled from house to house. This night she left belonging to a Heavenly Father. 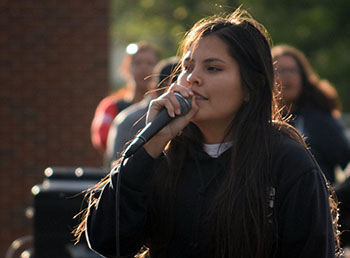 Night Two, our final night at Cedar Canyon, was the opportunity to believe God for a public coming to Jesus that would leave an indelible Jesus-mark here. The need for Him was so evident in the conversations that night.

Drew (Cherokee) talked with James, who was one of only four left in his family plagued with so much death. Thank God, James' suicide attempt had not succeeded. God kept him alive so Drew could introduce him to the Savior who had saved him from suicidal depression.

Only God could have brought our team member Cindy together with the girl she was led to. The local girl first joked about all her drinking. Finally she revealed that it was while she had been drunk that she was raped. Amazingly, that was exactly what had happened in Cindy's life. She was exactly the right messenger of God's grace for this wounded young woman. Who left knowing the same Savior who had given Cindy a new beginning.

Cedar Canyon needed to see hope break out. And they did. As people streamed forward to center court from all directions, declaring publicly their decision to choose Jesus. A night to be remembered. A night the triumph of life over despair was on display for all to see.

Our biggest nights so far. And our biggest harvest so far of this amazing Summer of Hope! And your prayers being answered all over the place!

And the relentless challenges of this summer keep reminding us of the decisive impact of your prayer. We are living the answers in each of these hard-fought, breakthrough victories.

Now this team heads for a reservation that could well be the most Gospel-resistant of the summer. As our teammates on the other team reach some of the most remote communities we've tackled in a long time. It is so empowering to know that the ground is being prepared by praying friends like you.

Because in places like these, bringing hope is nothing less than a life-or-death mission.