We knew it was going to be hard at Ivy Park. This is a reservation where there have been 75 drug overdoses and at least 15 overdose-related deaths just since 2016. With only a few thousand people living there, this has been devastating. One of the young ladies who came to the event said at least ten of her friends had overdosed in just the past couple of months. 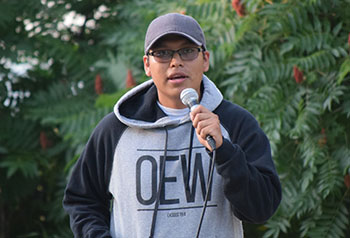 It isn't just the issue of heroin addiction. Beyond that, 30 percent of the tribe lives in poverty, staggering suicide rates continue to rise, and an increasing amount of violent crime is the new reality.

The location for our events happens to be a hotbed for drugs. We wanted to be there, because it was where hope was needed most. Our team had multiple people tell them that they had come to buy drugs from someone, and we even had a dealer show up there the first night. One of our team said early on, "I can see the drugs on their faces. I can see it on their arms."

But as we kept a watchful eye, something amazing happened. Those who had come to make a drug connection wound up making a Jesus connection instead. 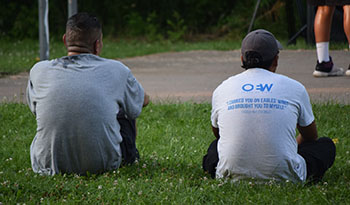 And that mirrors the story of one of our team members. His story includes the time he went to sell drugs at a youth outreach event...only to find Jesus instead! How amazing to have him share his story in that setting.

But these events weren't easy. When our team was asked how one of the nights went, the answer came quickly. "It was hard." Another followed with, "It was really hard." The team didn't see the biggest turnouts of the summer, and the setting was tough, but they kept to their mission. Even in the face of a court surrounded by young men and women staring at him, Weston gave a passionate, clear, and compelling presentation of the Gospel. They gave this community their best. And it showed in the results.

Because of their dedication, nearly half of those who had come to the events indicated a first-time commitment to Christ! These were the tough, hardened and hurting people, but they were ready for hope. As one young man shared with us, "I'm ready to try Jesus instead of weed." We pray he does just that, and that all those who chose Jesus see the difference He can make. 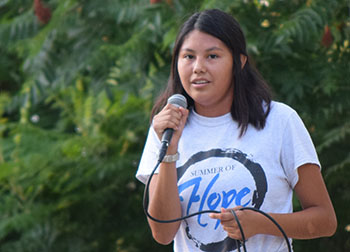 On Eagles' Wings has hosted bigger events this summer, but few if any will have had a higher percentage of people who were in need of the Savior. I praise God for this OEW team, and their dedication to reaching the hard to reach.

Thank you for praying – we need our prayer warriors more than ever!