It's the rez that will long be remembered for the night of the washout miracle. And the reminder of Who's in charge. 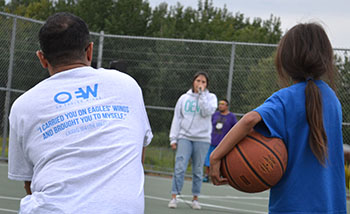 A baby born addicted to drugs has three strikes before they've even lived a day. The recent report from the High Mountain Reservation laments "a growing number of new babies born to mothers who are using."

It broke my heart to read what that means. The tribe says "a drug-addicted baby is inconsolable...fearful...plagued with uncontrollable tremors...their body is wracked by vomiting and diarrhea." I shared with our team that reaching young women in a place like this might also save some babies from a fate like this. The stakes each night are greater and more far-reaching than we know.

After a visit here years ago, I had described the people here as "the nicest, hardest people we've met in a long time." But this time, hearts seemed more open. Wherever OEW has gone, there is a good feeling that seems to last for many years. We came in on the legacy of a past visit to High Mountain. It's hard to overstate the impact of these young warriors who are like no one most reservations have ever seen before. 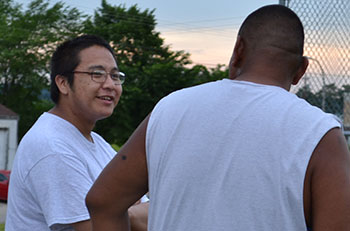 Our Night One was a night of what we call "divine match-ups." Lindsey (Pawnee) was led to a girl who had gone through a lot of pain at home, much like her own. Brittany (Navajo) was actually able to minister to a grandmother by sharing a part of her Hope Story "I don't usually tell" - how Jesus had made the difference as Brittany dealt with her brother's health battles. It matched so much in the grandma's experience.

The youth worker at High Mountain said the magnet of the team had brought out "people I haven't seen in years." That night, one-third of the people there indicated they had begun a relationship with Jesus Christ!

But the night we won't forget was our second and last night there. We were anticipating a big night in light of what happened the night before. But then the rains came. And came. And came. Even as we prayed for the kind of weather-parting miracle OEW has seen so many times in the past. 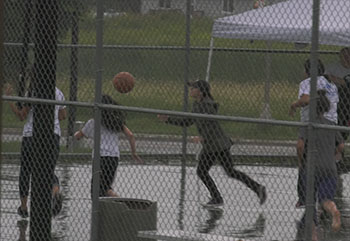 That miracle never came. Another one did. Most people assumed our event was cancelled. Brad and I were seeking God's wisdom for how to proceed. Then a handful of locals showed up - because they saw some of our intrepid warriors shooting around in the pouring rain. That said, "We're not giving up!"

We were contemplating trying to get them to move to the only church in the community where we would serve the pizza we had promised. Suddenly, we saw the 25 locals who had shown up standing at one end of the court, listening to a team member (Yup'ik Eskimo), who's never publicly shared his Hope Story, sharing his Hope Story! The locals were standing there listening to every word. Our team playing ball in the rain with them, then getting better acquainted with them, had formed a bond we could never have planned. 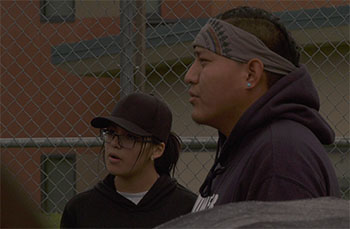 Then Brandon (Navajo), who was scheduled to do the closing wrap-up, headed out on the court to give them the Gospel. I did what I almost never do. I put on a jacket and a ballcap and got out of the vehicle to hear and feel what God was doing. It was priceless. Brandon was warm, winsome and powerful as he shared with this ad hoc audience of soaked listeners. As he spoke, the rain stopped. And the sun appeared over his shoulder - in essence, haloing God's messenger.

That night almost everyone there indicated they had prayed to begin a relationship with Jesus! Percentage-wise, by far the greatest response of the summer! 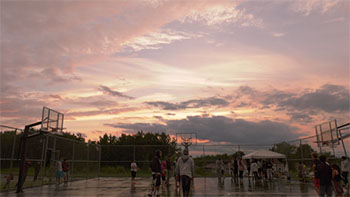 We had our plan. God preempted it with an "untimely" rain. And showed us His glory by winning the victory with His program. He never ceases to amaze.