They called her one of this reservation's "baby mamas" - girls so very young with babies they're not ready for. One of those mamas died just before we got there - another life lost to a drug overdose. And a baby without a mother. And the night of our final event, a funeral for another drug fatality. Tragic reminders of how very much these people need Jesus. 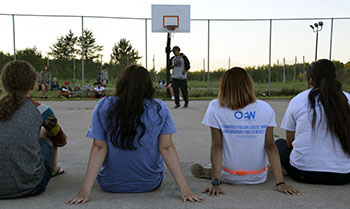 We've been on the Fort Harwood Reservation before. The last time we came, we saw a lot of broken buildings. God used the team so powerfully that they named a youth building "On Eagles' Wings."

But in recent years drugs have consumed more and more people. It's lives that are broken this time. The thief keeps coming to "steal, kill and destroy" (John 10:10). Thankfully, our team is back together, coming in full force, after dividing to reach out to two reservations at the same time.

With only two nights here, the first night really had to count. Everywhere we looked, a warrior was matched up with a local young person. That's the precursor to many hearts being touched. While the sports and games at center court appear to be the main event, the real action is all those holy conversations. Where a warrior becomes the voice and the face of Jesus. 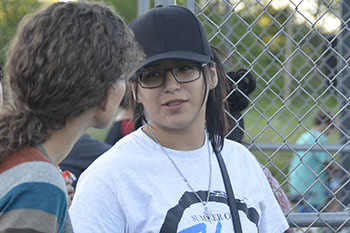 The last two reservations had been a battle. Night One at Fort Harwood, God gave the warriors a night with great conversations, our largest turnout so far and ultimately a rescue victory. Part of that came from the Hope Story of one of our young women when she revealed dark parts of her life that she had never talked about before. And the Savior who had forgiven her and healed her from the scars of a broken season.

That night one out of five young people there indicated on their response card that they had opened their hearts to Jesus!

The caring connections the warriors had made our first night set the stage for a decisive final night. At our last reservation, the invitation intrusion had so confused or unnerved those about to respond that no one came forward. An uncommon scenario that left some of the warriors a bit discouraged. 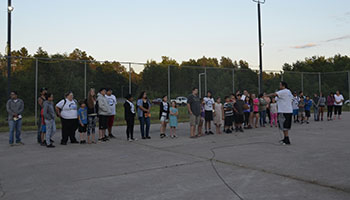 But now, at Fort Harwood, something extraordinary happened. Cody (Creek) had just finished leading in a prayer to begin a relationship with Jesus and was starting to explain the public invitation. "Jesus died publicly on a cross for you. In just a moment, I'm going to ask you to choose Him publicly..." Before he could actually call people to come, they started coming! The first guy forward stood near Cody, boldly facing all the people.

Others came from other parts of the venue, taking their stand, facing everyone. When Cody said, "If you're going to come, come now," a number of others came, joining those who just couldn't wait! A night to remember for these embattled but unrelenting OEW warriors!

And those who said yes to Jesus these two nights are going to be well cared for. The local leaders here are deeply committed to an immediate and aggressive follow-up. 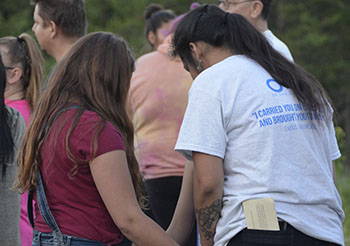 After that final event, one man from the follow-up team said, "You guys don't know who that first man forward is. It's Barry, the guy I bought my drugs from when I was in high school! A guy you didn't mess with." After Barry was counseled by a team member, he wrapped the local youth leader in a hug and gushed, "This is AMAZING!"

It really is. On this reservation where drugs are enslaving - even ending - so many lives, a prominent dealer has publicly given himself to Jesus. By the end of the night, we knew we had experienced the greatest harvest so far in this Summer of Hope!

We know we are living the answers to your prayers! So please, don't stop now! Two-thirds of the Summer of Hope is still ahead.

And for Fort Harwood, a wave of hope has come where there has been so much sadness.