It's just like God. To save the most broken, most heart-wrenching reservation for last. When our full team is together. When every warrior is supremely battle-tested and battle-taught. And when, because we are at end of our strength, we will have to totally depend on His. 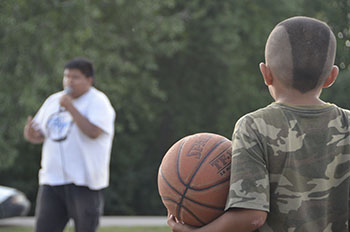 West End Reservation. Our final battle of this unforgettable Summer of Hope. The one where I heard more warriors talk about their heart being broken than any other.

Yes, the tribe has declared a state of emergency in the fight against rampant drug trafficking. Our team had to be told not wear sandals because of so many discarded drug needles in the grass.

Yes, the suicides are happening at a rate well above even the national rate among Native Americans, which is several times any other group. And, yes, we had heard about the two 11-year-old girls who had killed themselves last spring.

But it was the children that haunted our team. Born in a place where one out of three comes into the world addicted. They seemed like orphans - but orphans with parents. They told stories of seldom being home because they weren't wanted there - because of parents who just wanted to do their drugs. 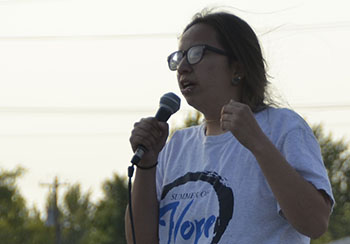 They were wild because they were raising themselves. Because, as one elder pointed out, so many have been sexually abused. At our events, the children would fight, go after our equipment, even try to pick fights with team members.

As Ginny (Onondaga/Seneca) shared her Hope Story about her mother being in prison for murder and her dad being gone to drugs, a little eight-year-old boy rode up to her on his bike and just stared into her eyes. His eyes were bloodshot and swollen. Ginny said, "I can't get him out of my mind." And none of us could forget the child we heard about when we arrived - who had literally been set on fire the night before.

As our warriors listened to the brokenness of the children, it was becoming clearer why 11-year-olds would decide they didn't want to live anymore. Any fatigue we were feeling was overwhelmed by the sense of desperately knowing we were needed here.

Each of our three nights, locals arrived before we arrived to set up - and the turnout was amazing. 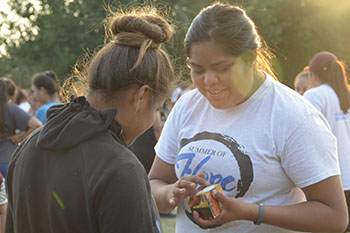 Over our three nights, the nightly growing crowd heard Hope Stories like Cassie's (Navajo), who told about a family so broken that she reached a point of literally choosing to be drunk or high or using a guy almost every waking moment of her life. Until she came to Warrior Leadership Summit and heard about a Love that would never end and a "Father who will never hurt me." She said, "It was the first time I ever felt safe in my life."

Brent's (Nez Perce) story the final night had a heartbreaking poignancy about it because he learned that afternoon that one of his best friends had committed suicide that very morning. But somehow he found the grace to tell his own story that culminated with him looking in the mirror at a party and seeing his alcoholic dad who had wounded him so deeply.

He told how he found Jesus just as he was planning his own suicide - and then about the friend he had just lost. So when he said, "I don't know how you're feeling, but I tell you - there's HOPE for you guys," it went straight from his heart to theirs.

God saved our largest attendance of the summer for that final night. Invitation night. And when the call was given, man, did they come! 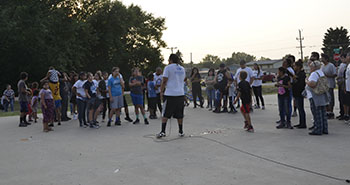 It was a night of breathtaking redemption miracles.

The girl who saw her sister commit suicide - and had to cut her down. She belongs to Jesus now.

The girls with lots of scars on their arms - one that just said, "Alone." Five of those girls came to Jesus.

The kid whose father left, whose mother died, who was beaten by 15 guys. God's kid now.

A 23-year-old traditional religion relative of the boy who had been set on fire - he gave his heart to Jesus.

The guy who had fled from Ironton, the urban rez we'd been at earlier. He had quit a gang and had run to escape the people who wanted to kill him. He tried suicide last week. He went forward to accept Christ and later hugged the warrior who had spoken with him. He said, "My new life starts today." 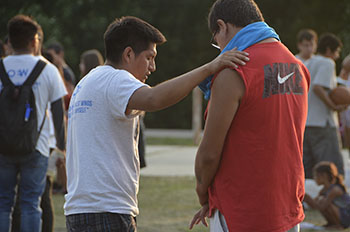 A lot of new lives started that day. By God's amazing grace, it was, by almost twice, the largest harvest of the Summer of Hope! In the most broken place God had sent us!

Soon I'll have for you a report of the big picture of what God has done in these days when you've been praying for us. But for now, I'm just in awe, even as I write. Of a God who is so mighty to save. The God who has heard the cries of the West End children, both little and grown. And He has come down to rescue them. By sending Hope in gray-shirted warriors who really know broken. And who really love Jesus.