We went to the Black River Reservation last year on a wing and a prayer. It's in what I believe to be the most Gospel-starved part of this country - a tragedy exponentialized when you're talking about the Native people of that area. 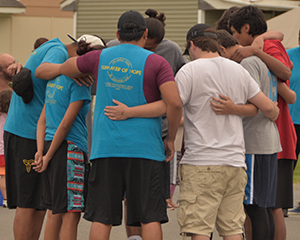 We didn't have our usual partners to work with. When Nick (Jicarilla Apache), our On Eagles' Wings Coordinator, came on a pre-visit to our 2016 reservations, he just dropped by the Black River tribal offices, knowing no one. They approved a team visit and a venue for us to use.

Ten minutes in the tribal office. Next thing you know, On Eagles' Wings showed up last summer to establish a beachhead in this Gospel desert. Though we don't usually come back to a region in back-to-back years, we wanted to get back to Black River to build on last year's fruit.

Last year, no one had heard of the team. This year they were excited that On Eagles' Wings was coming back. Many even remember the name of the warrior who talked with them about Jesus last year!

Christianity is viewed by many as, in the words of a tribal leader, "what has caused 400 years of damage our culture." But the Hope Stories of this team are living proof that Jesus is the only Hope for the deep brokenness of their generation.

There were many life-changing conversations that showed why God wanted the warriors to return to Black River. 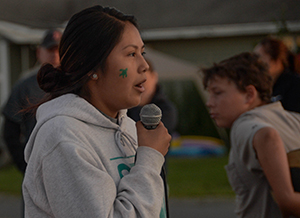 Like the young girl Carmen (Navajo) talked with, using a Rubik's-like cube that creatively presents the Gospel. The girl wonderfully prayed to make Jesus her Savior. Then she took the cube from friend to friend, using it to tell them that Jesus died and rose again for them. When she showed it to her sister, her sister prayed to give herself to Jesus. Then, she told Jesus' story to her parents - who told Carmen, "Our girls have got us thinking about this now."

Lane (Nez Perce) called this "the place where God broke my heart last year." He's carried the names of the guys he talked to in his Bible all year as a reminder to pray for them daily. This year he reaped the harvest of those prayers!

Leslie (Tuscarora/Seneca) and Brianna (Navajo), our two youngest team members this year, were led to talk with two older women. One of them had serious distrust of Christians - by the end of the evening, she was hugging our girls as their new sister in Christ. When the invitation was given, the other woman literally ran to center court to confirm her new commitment to Jesus. 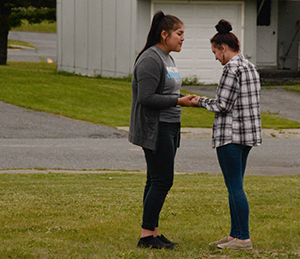 One of the unforgettable moments of the summer will definitely be Brianna's Hope Story our second night at Black River. I had read much of it in what she wrote at Boot Camp - living in fear of violent parents, believing what they said about her being worthless, the self-mutilation to bleed out her pain. Then the part she had never told anyone - about how close she came to a desperate end.

That was when she was invited to an On Eagles' Wings event where she lives. That night she heard a girl with a story like hers share the Hope she had found. That night she brought all her sin and all her pain to the One who bled on a cross for her.

Now, here on a reservation far from home, she was sharing her Hope Story as a Hope Story had once been shared with her. She said, "I looked into the eyes of those girls listening to me and it was like I was talking to myself the night I found Jesus. I had to tell it all." 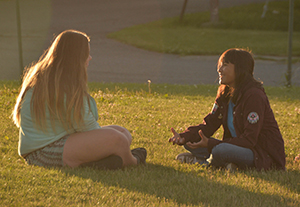 It was one of the most powerful, moving Hope Stories of this Summer of Hope. Brianna's open heart clearly opened hearts just before the Gospel wrap-up. Many Black River young people who came without Jesus left with Jesus in their heart.

But here, as on every reservation this summer, the celebration at our debriefing was mixed with tears. Because these warriors are brokenhearted when someone they've poured out their heart to rescue leaves without Jesus. I share with them the wonderful promise of Scripture: "They weep as they go to plant their seed, but they sing as they return with the harvest" (Psalm 126:6). 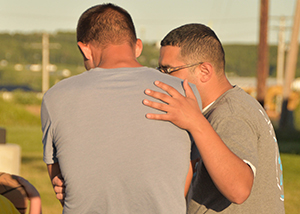 Just beyond the court where Jesus broke out, I kept watching this light. It revolves on top of the tower just across the street. But there's no water nearby. When I asked a local why the light was there, he said, "The woods around here are so dense that people often get lost. This light can be seen for 50 miles. So if a lost person follows that light, they'll make it home safely."

Just across the street, the light of Jesus shone brightly in a dark place. And lost people found their way home.