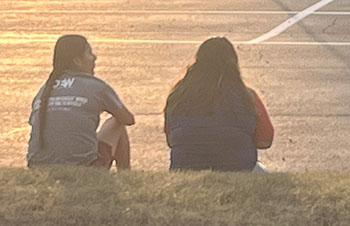 On Eagles' Wings Update -- "Lord, You gave these people a chance!"

It's hard to describe what a "yes" to Jesus means on this reservation. As local Native believers explain, following Native religion here isn't just what you believe - it's who you are. And you are raised to reject Jesus or else, in essence, lose who you are. The walls of this stronghold extend very high. It is that wall the warriors of On Eagles' Wings 2022 had to surpass in order for their Message of Jesus' Hope to break through.

Just before they went out to the "battlefield" for our Night Two event, they prayerfully raised their written Hope Stories to offer them for the Savior to use. They prayed aloud - a symphony of voices offering the story of their life to the Savior who had changed it forever. It was His story, wrapped in their story, that God used to help forge a crack in that wall!

That second night, Carlyn talked with a girl who was really listening to the OEW Team Hope Stories (testimonies). When Carlyn asked if Missy wanted to hear her story, Missy said, "I was waiting for you to tell me." Missy has been brought up in a home where they practice their Native religion. Carlyn felt Spirit-compelled to keep telling her that "we love you guys." Carlyn said to the team later, "Every time I told her that, her eyes would get watery." Ultimately, Missy said, "I never understood why my people are so angry against Jesus." While Missy did not open her heart to Jesus that night, one thing is sure - from now on, when she hears His name she will know what it means. "Love. Relentless love." 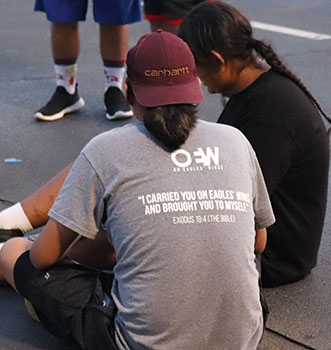 So will the girl Cherie talked with. The reality that Jesus is a relationship, not a religion had begun to open this one young woman's heart. She asked Cherie about how that relationship worked. Cherie explained the Gospel to her, saying that trying to explain God's love was "like trying to count the stars or the grains of sand on the beach." It was quite simply the magnitude of God's love that was opening shuttered hearts all across the crowd.

On our final night, Tyler shared his story of a lifetime of abuse, rejection, loneliness and depression - leading him to the conclusion that he just wanted to die. Thankfully, God intervened and Tyler could say: "Through all the ups and downs, I've had one constant that never left - Jesus loves me, and I love Him. There is hope. I've learned to forgive, to love and to know that Jesus saved my life."

Anna is new to the team - so it was a real act of courage for her to share her Hope Story for the first time publicly in this challenging place. She started by announcing, "I'm really scared." Which only served to endear her to everyone. Then she poured out, with the most transparent honesty, the pain and sin that had driven her to self-harm and thoughts of suicide. But that was when she heard about "the love of God. How He chose to love a sinner like me and could forgive all my sin I had done - and make me free. His love could fill the hole in my heart, take the pain and give me a purpose. I am not alone. He knew all the wrong I had done, but still chose to forgive me." It was so heartfelt, so real - and so compelling. It seemed that every person there was listening intently. 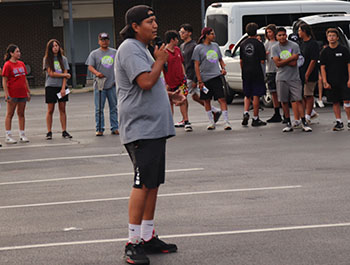 After Wes's powerful Gospel presentation and public invitation, we prayed fervently, knowing how very hard it would be for anyone to choose Jesus publicly on this reservation. But some did!

Like Joe. A big, heavily tattooed guy - pretty intimidating. Perhaps the toughest guy there that night. He told one of our warriors, "I'd love to stand for Christ among my people!" Joe had never prayed before. His first prayer ever was to ask Jesus into his life!

There were others who came to Jesus in this sacred visit of God's Holy Spirit to a school parking lot on a Gospel-starved reservation. In fact, Lexi had rejected Jesus throughout the night as Jessica relentlessly kept reaching out to her. Lexi is from a home where they follow the Native religion, and are fortified against any talk of Jesus. But our warrior refused to give up - though she was starting to get discouraged. She came for prayer, and we joined her in fighting for Lexi in the Throne Room of God. After a night of seemingly futile rescue effort - in the last moments before Jessica had to leave - Lexi decided she wanted Jesus in her heart! 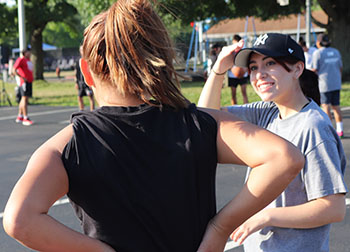 Throughout this embattled night, we were so keenly aware of the difference your praying makes! You didn't see the battles as we did from our vehicle, but you were here in powerful ways you can't imagine. As an invisible spiritual war for souls raged over a reservation parking lot.

I realized anew the significance of each commitment here as I walked with a brother in Christ from this tribe - one who had battled many obstacles to arrange for our team to be there. As he shared some of those struggles, I shared with him how many local young people had begun a relationship with Jesus on Night Two. Suddenly, this big Native man was overcome with tears as he covered his face with his hands and said in amazement, “Really? Oh, praise God! It's worth it all!"

Later, at our team debriefing, Hayley - who is from this tribe - prayed through her tears - "Lord, this means so much. Thank You for all that's happened! We give You our stories, our time and our energy." And then, words I will hold in my heart - "You gave these people a chance!" That's what these warriors represent. A chance to go free. A chance to cross over from death to life.