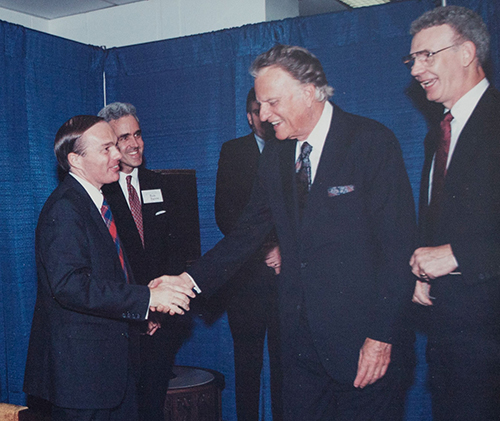 Young Billy Graham wanted to be a baseball player. Instead, he became a messenger of Jesus' love. And he never took his eye off the ball.

Whatever the headlines, whatever the politics, whomever the audience, Billy Graham was unwaveringly about one thing - Jesus and His Cross. No detours. No baggage. No "religion." Just Jesus.

I was privileged to touch just the edge of his life. He touched my life all the way to its core. By embodying a Jesus-loving life. Because sometimes you have to see it to be it. In Billy Graham, I got to see it.

Privileged to be involved in several aspects of his ministry, I quickly learned when you were with him, it was never about him - it was always about you. Never a whiff of self-importance - only amazement that God would ever use him. Never a crack in his integrity, always taking the high road. A pioneer who never compromised his message, a shining example, keenly aware of his shortcomings.

Yes, Billy Graham talked with Presidents. More importantly, he walked with Jesus. And brought countless millions with Him.