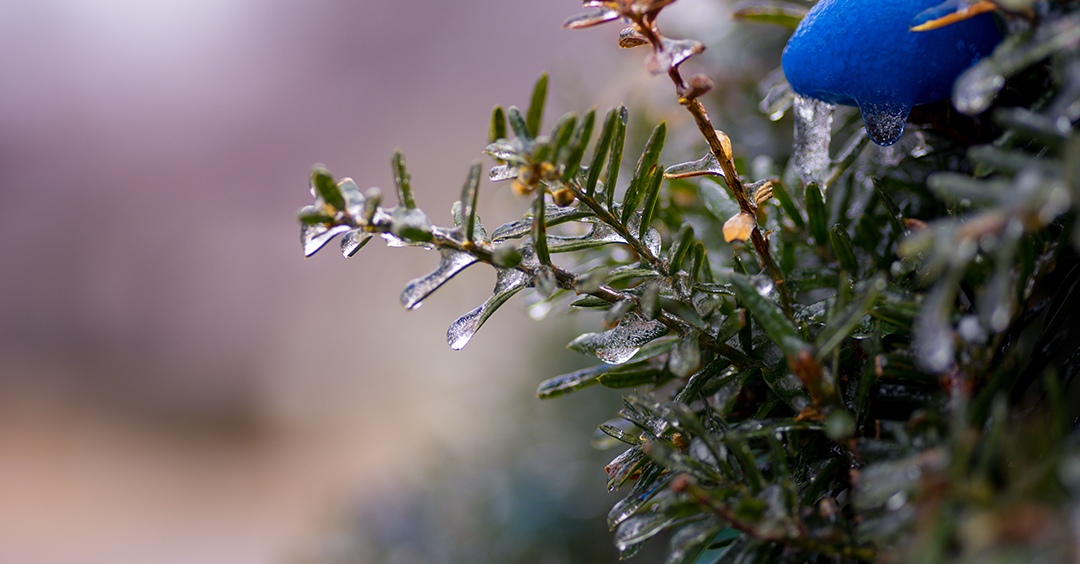 Let me give you a little weather preference test (as if we get to vote). Why don't you rank these one, two, three from the best to the worst: rain, snow, ice. I just gave you my ranking. Rain is no problem. I grew up in the Midwest; and I lived in the Northeast so I can handle snow. Even when you have to walk or drive, there's at least something to dig into. But ice? Oh, man, ice storms can leave some very nice things behind. Every branch, limb, and home is glittering with this beautiful coating of ice. But it is a pain if you've got to go anywhere. Reminds me of an old song, "Freeze a Jolly Good Fellow."

Well, anyway, we've had some major league ice storms where we live, and I went out one morning and I found my car entombed with this thick, hard armor of ice. I could have just tried to chip it away. In fact I started to do that. But I would have either damaged the car or damaged its' owner. So I decided to work smart. I let the car run for a while, and I warmed it up from the inside. You know what happened. A few minutes later that ice came off pretty easily.

I'm Ron Hutchcraft and I want to have A Word With You today about "Thick Ice."

Our word for today from the Word of God comes from Acts 16. It's kind of about ice around a heart. See, the ice around a car is hard to penetrate, but the ice around a person is even harder. Maybe you can think of a person you're concerned for right now who's pretty hard. Maybe some person who's got an affect on your future or your security, and there's ice around them.

Well, almost everyone has at least one impossible person in their world; one person whose ice you just can't seem to get through. Let's look at God's way of getting through the ice. For example, in Acts 16:14, the missionary Paul comes upon a woman named Lydia, a prominent merchant in her town, and it says, "The Lord opened her heart to respond."

Back in the Old Testament Saul didn't want to be the first king of Israel until it says in 1 Samuel 10:9, "The Lord changed his heart." Proverbs 21:21 says, "The king's heart is in the hand of the Lord. He directs it like a water course wherever He pleases." You get it? God's in the heart changing business; the heart warming business.

Think about the person in your world who's hard to reach. Maybe it's a defiant or a wandering child, an unresponsive mate. Maybe you've got a hard-to-talk-to boss, or employee, a coworker, or fellow student, or a person who will be making the decisions that could greatly affect your church or your ministry; maybe someone who seems as if he or she won't ever give Jesus a chance. Well, God's method of melting the ice is the same as mine for de-icing my car. Warm the person up from the inside, change their heart, soften their heart, turn their heart your direction.

Malachi 4:6 says, "He will turn the hearts of the fathers to their children and the hearts of the children to their fathers." So often we try all kinds of things to convince people, and nag them, and politic with them, and lobby them. But recently I've been learning the power of a simple but powerful prayer, "Lord, change his heart; change her heart. Warm them on the inside. Turn their heart your direction, my direction. Move them to be open to what You want."

Many of us have made getting through human ice a lot harder by under-praying in this area. Why don't you focus your praying on the hearts of key people? Ask God to remove the blinders, to give you favor, to neutralize prejudices, to create openness. We'd probably have a lot less conflict and a lot more success if we'd spend more time talking to God about a person than we do talking to the person or about the person.

And remember, God's a heart warmer, a heart softener, a heart changer. Pray as if He is. It works with a frozen car or a frozen person. When they've been warmed on the inside it's a lot easier to get through that ice. And believe me, no one can thaw out a heart like God can.