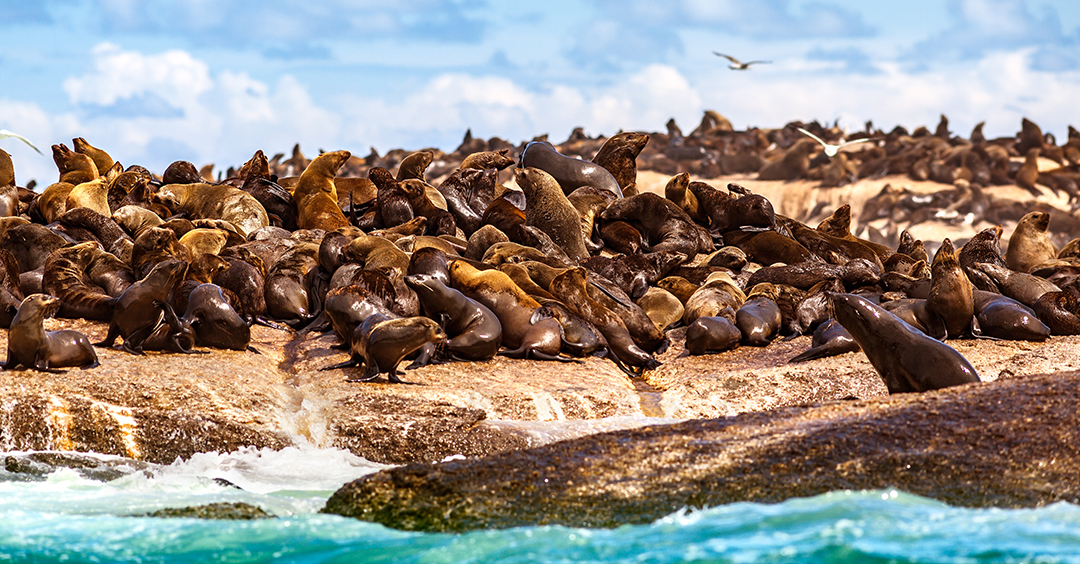 They advertised a special on "flying sharks." And the TV channel didn't disappoint the people who tuned in. They showed an island off the coast of South Africa where great white sharks jump as much as 15 feet in the air with their prey, and the seals are their meal du jour. The area around this island is called the "Ring of Death"...and a whole lot of seals would agree. No one knows exactly why the sharks there get airborne as they do. It's apparently the only place on earth where they behave like this. But the TV special showed real footage of a shark suddenly coming up underneath an unsuspecting seal, grabbing it in his jaws, and soaring into the air with his catch. Now the seals have learned something about these jumping jaws. The sharks seldom attack when they're traveling together. So they tend to stay in groups of seven or eight. Smart! But occasionally a stubborn seal will just go off on his own. And the scientists say when a seal goes off by itself, he is just asking to be shark lunch.

I'm Ron Hutchcraft and I want to have A Word With You today about "The Power of Together."

There's a powerful lesson to be learned from those seals who live in the "Ring of Death." You want to avoid being your enemy's prey, stay with the pack!

We know from 1 Peter 5:8 that you and I have an enemy, the devil, who is "looking for someone to devour." And I'm convinced that he operates much like those sharks - he looks for someone who's off on their own and pounces on them. You're a lot less vulnerable as long as you're sticking close to your spiritual brothers and sisters, and to your family. The problem is that right now maybe you're allowing yourself to be isolated, distant, and even cut off from people who love you and people you love. The shark from hell loves that.

The first followers of Christ were living in a "ring of death" in Jerusalem after Jesus' death, resurrection, and return to heaven. But they knew one of the great secrets of safety and strength. In our word for today from the Word of God, Acts 2, beginning with verse 42, the Bible says, "They devoted themselves to the apostles' teaching and to the fellowship, to the breaking of bread and to prayer. All the believers were together and had everything in common. Every day they continued to meet together in the temple courts. They broke bread in their homes and ate together with glad and sincere hearts." Did you notice the key word here? Together. Right! They stayed together, and it was very difficult for any predator to get them.

So, here's the question. Have you allowed some walls, some distance, some resistance to develop between you and the people you've been close to? Maybe you've been wounded, maybe there's been misunderstanding, poor communication, some careless words spoken, a lot of frustration, maybe you didn't get your way. Or maybe you're just hurting or struggling and you don't want people to see you like this.

For whatever reason, you're like one of those seals. You're away from the protection of your brothers and sisters. Remember, God said way back in the Garden of Eden, "It is not good for man to be alone." That's still true. And you're allowing yourself to be way too alone. Shark bait! Out there by yourself. And that's where Satan can get you to believe all kinds of lies, get you to fall for all kinds of temptations, and get you to do all kinds of things you never thought you'd do.

Please, whatever your reasons for isolating yourself, get back to your family, get back to God's fellowship, get back to the church, get back to those you were serving the Lord with. You just can't afford to be swimming out there all by yourself. The sharks of hell love it when they can get you alone. So don't give them that opportunity to strike.