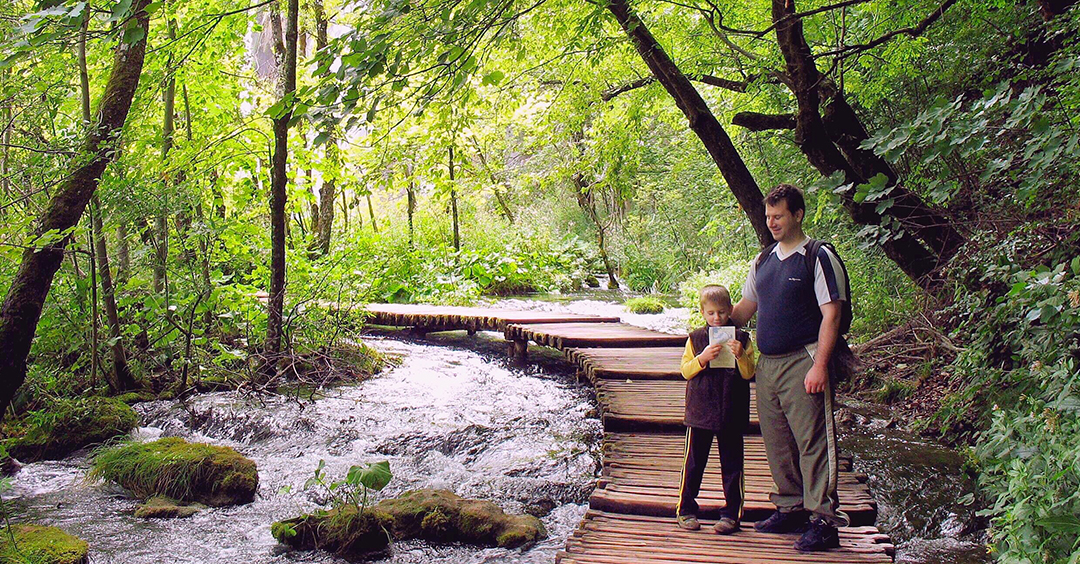 Well after years of being City Boy, living in the country. Yeah, and boy, I learned a lot from the Country Girl I married. One day I was sitting on the front porch, just peacefully reading my Bible, and I noticed that a calf from across the road had decided the grass was greener on the our side of the road. Somehow, he had picked his way across the bars of the cattle guard, wandered down the road and was slowly munching his way toward our yard. Now, we agreed we really didn't want him in our yard all day while we were at the office. He'd probably eat the flowers. He'd probably fertilize our lawn in a way we didn't want it fertilized. My wife stuck her head out the door and said, "Just yell at him; scare him back across the cattle guard and into his pasture." OK, I yelled at the calf. He didn't move. My wife said, "You'll probably have to chase him, too." Oh, she saved that for later! Oh great! Here goes City Boy running down the road (you want to try to picture this?), waving his arms and yelling at a cow. Hey, it worked! The calf went running back down the road, across the cattle guard, and back where he was supposed to be. I wonder if it had anything to do with the fact what I said to him, "Burgers to go, boy!"

I'm Ron Hutchcraft and I want to have A Word With You today about "Steering Your Children Where They Need to Be."

By the way, if you're wondering if there was any pun intended in that word "steering" - don't be silly. Now, I've got to tell you this. I saw something enlightening in what that youngster responded to (I mean that young cow), and what he didn't respond to. Something that might help you get a child of yours where they're supposed to be.

First, our word for today from the Word of God. It's those familiar and powerful words in Proverbs 22:6 - "Train a child in the way he should go, and when he is old he will not turn from it." Wow! Let's put that together with a verse that follows in Proverbs 23:13, "Do not withhold discipline from a child."

Okay, back to Mr. Wandering Calf for a minute. I tried words on him; they didn't work. I had to follow through with actions that supported my words. And I had to be consistent until he got back to where he was supposed to be. Now children aren't calves, but some of the principles of directing their behavior have some things in common. When God tells you to "train" your child, to "discipline" your child, He's talking about much more than just saying the words. You can tell, you can yell, you can nag, but words alone don't direct a child to the right choices. You have to follow through with actions!

And I don't mean some uncontrolled anger or some unfair or brutal punishment that is in no way proportionate to the crime. That just diminishes your authority in their eyes and actually puts them in the position of controlling you. No, your child needs to experience fair and logical consequences for going where they shouldn't go, or doing what they shouldn't do, or saying what they shouldn't say. Set the boundaries and set the penalties in advance, not in the middle of the crisis. Explain the why for the boundaries. That's the "words" part of training them.

But then you need to consistently and lovingly enforce those consequences. You need to respond as soon as they wander outside the fence before it's a crisis; before it's a showdown, and every time they wander outside the fence. It 's hard to stop and follow through early and follow through every time, but if you do it consistently for a while, eventually you'll have a child who knows that boundary is real and it's not smart to go beyond it. Your boundary will become their boundary. Consistent discipline is a short-term sacrifice to reap some long-term peace and you have to model what you're teaching with your life.

For wandering calves, for wandering children, it takes more than words to steer them back where they're supposed to be. You have to follow through with actions and pursue it until they go the right way.