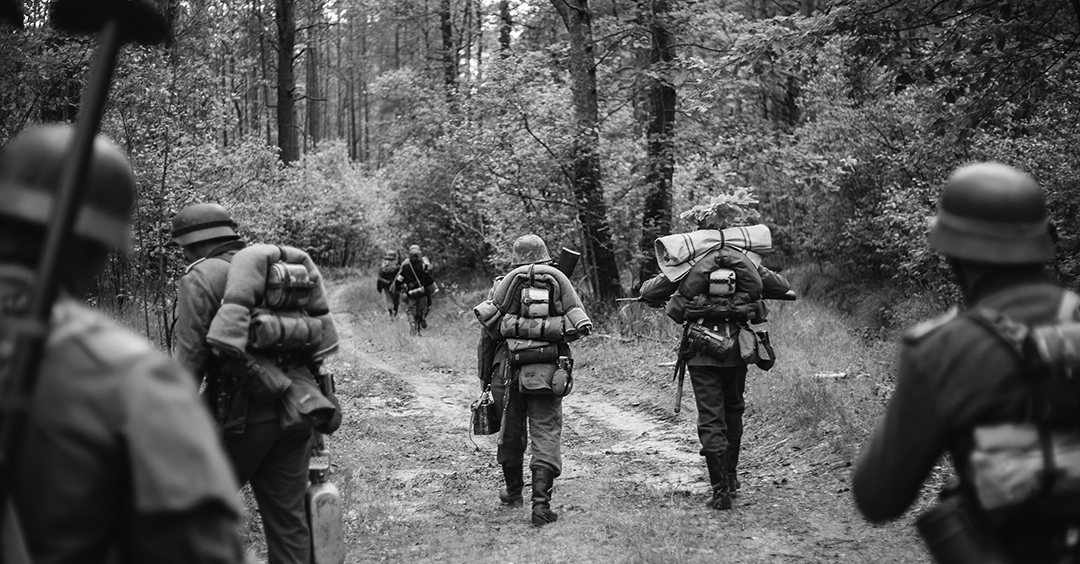 "Our planes were in the air." That's what the Air Force briefing officer told us as we had the privilege of touring a major American defense command facility. He was talking about a day during the Cold War when, unbeknownst to most Americans, World War III could have almost begun. America's warning systems had indicated clearly that Russian planes were in the air and headed for the United States. In those days when nuclear war was our greatest fear and a real possibility, the orders were given to get our planes in the air. Those planes were headed for the Soviet Union with the capability of starting a nuclear war. Why hadn't you heard about it? Thankfully, the trackers discovered in time that what was sent out was an erroneous message about the Russian planes. You know why? Because of one defective computer chip. That's a close call!

I'm Ron Hutchcraft and I want to have A Word With You today about "How To End The War You're In."

We never knew how close we had come to being in a war that would have been a tragic mistake. Thank God, that war was avoided. Of course, not all wars are between nations. No, some are between individuals. You might be in one now: in a family, a church, a neighborhood, a school, a team, an organization. There's a good chance it's a war God doesn't want you involved in. It's a war He wants to help you either prevent before it starts or end it if it's already started.

And He's given us a plan for peace in our word for today from the Word of God in Joshua 22, beginning with verse 10. Here's the scene. The twelve tribes of Israel have conquered the Promised Land, each tribe now settling the portion of Canaan that had been given to them. The tribes of Reuben, Gad, and the half-tribe of Manasseh returned to their land, which happened to be on the other side – the east side of the Jordan River. That distance set the stage for what was almost a war between the west-siders and the east-siders. A war that should not have been; maybe like a war that's looming in your life. There's a lot of lesson here. Follow this.

The Bible says that the two and a half tribes on the east side of the river "built an imposing altar there by the Jordan." When the rest of the Jews heard about this "they gathered at Shiloh to go to war against them." See, they were thinking that they were establishing an alternative to the worship of Jehovah God by setting up another altar.

The Book of Joshua goes on to explain that the Israelites sent a high-ranking delegation across the Jordan. They said to the east-siders, "How could you break faith with the God of Israel like this?" And the east-siders explained they weren't rebelling against God by building this altar. They were just afraid that someday another generation might cut them off from worshiping the Lord on the other side of the river. In other words, it was to insure that they could worship Jehovah God. You know what the result was? The west-side leaders returned home with their report and here's the end of the story, "they talked no more about going to war against them."

Let's bring it down to us. Conflicts often result from misunderstanding the other person's motives or actions. The only way to avoid that is to do what these ancient Jews did. Go directly to the person or persons involved and let them explain what they're thinking. Don't go on hearsay, second-hand information, rumors, or suppositions. Peace between God's people is too precious for that. Go to them – don't wait for them to come to you. Use healing words like "Help me understand", "Let's not let any walls get between us", "I miss you", "Please forgive me", "I forgive you", or even those hard but healing words, "I was wrong." So many wars – in your family, in that friendship, in a working relationship, in a ministry are unnecessary wars where only the devil wins.

We can't afford to form our firing squad in a circle and shoot at each other. We need to reserve all our ammunition for the enemy that wants to bring us all down. The war-preventing, peacekeeping plan of God can be pretty well summed up in these twelve little words from James 1:19, "Be quick to listen, slow to speak, and slow to become angry." Remember: blessed are the peacemakers!